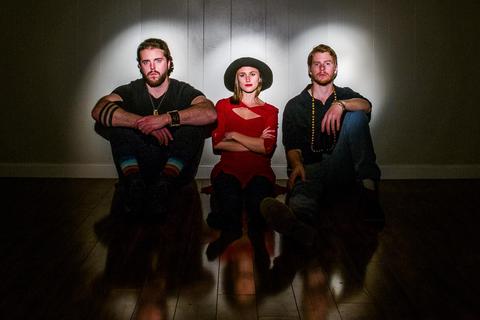 With a slow, deliberate build, the Ballroom Thieves make their presence known onstage immediately as the first chord is struck, transforming any size room, whether it be a large ballroom or a small club, into a remarkably intimate environment.

Formed in 2011, the Ballroom Thieves take the sincere, narrative blueprint of folk music and infuse it with the attitude of rock, the soul of blues, and the sweat and fervor of a revival tent. That spirit makes its way into both their recorded music as well as their live performances, as Martin Earley (guitar, vocals), Devin Mauch (percussion, vocals), and Calin Peters (cello, vocals) attack their instruments and harmonies with the same energy onstage as in the studio.

Garnering regional and national acclaim for both of their releases to date, 2012’s The Devil And The Deep, and 2013’s self-titled EP, the Thieves have been branching out from their native Boston. Their energy, passion, and songwriting craft earning them national touring spots with established bands such as the Lone Bellow, Dispatch, Little Green Cars, the Wheeler Brothers, and Houndmouth, among others.

The show at Holy Mountain Backyard on Saturday, March 15