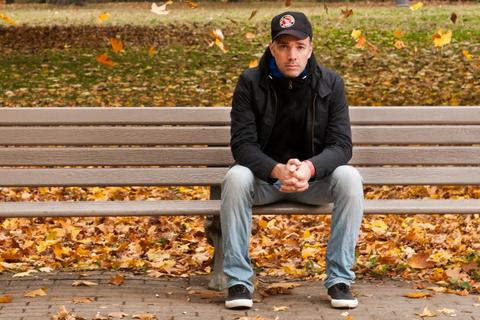 Rich Terfry is Buck 65. He's from Mt. Uniacke, Nova Scotia, which qualifies technically as the middle of nowhere. When he started making music, he was terrified that his friends would find out about it and kick his ass. That was a long time ago. In the last 20 years, he has released and given away more than 20 albums and countless other stray songs.

Buck 65 travels the world alone and collects books and movies and overheard stories. What he has seen and heard has depressed and inspired him.

Buck 65 raps, sings, makes beats, plays instruments and DJs, but is best known for his dancing.

Buck 65 has a new album coming. It's a super-depressing divorce record you can mostly dance to - like Leland Palmer in Twin Peaks. If that's too obscure a reference, a quick explaination...

Twin Peaks was a TV show in the early 90s. In it, Leland's daughter, Laura was murdered. A night or two after it happened, distraught and demented, he went out dancing. He cried while he danced and his movements were strange, but he inadvertently created a new dance craze.

Buck 65's new album is your opportunity to channel your inner Leland.