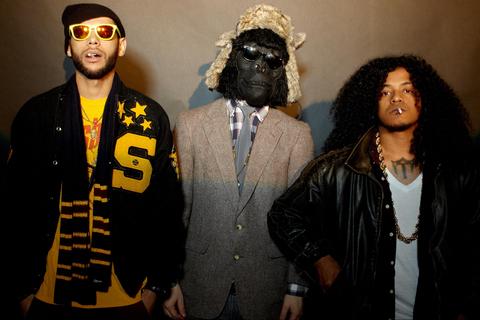 Smoke rises, lasers paint the room, two mcs and a gorilla with a gift… Goldyard. In a time when music is looking for the next wave of style and creativity, this trio has found that imitation is not always the highest form of flattery. With edgy subject matter and a mesmerizing rockstar aura, this group has blazed a hot new trail in popular music.

This high energy group consists of A.T, hailing from Salisbury, NC, In-Doe from Long Island, NY, and Flick James from Los Angeles, CA. Their eclectic musical range and off kilter seemingly unstructured style has created a new lane all its own. With a mesh of hip-hop, electronic, and everything in between, this group paves the way for innovators and creators of the future.

Building on their 2011 album "Us And Them" released in the Fall of 2011, Goldyard recently released their first EP "Fuck Culture" , the first of a three part series to be released throughout the year 2014. “Fuck Culture is a haunting, bass and synth-heavy ode to vulnerability, the finiteness of life, and all of the awesome/fucked up experiences that gets us through it all” says Gavin Godfrey of Creative Loafing.

Outside of Goldyard’s personal musical catalog, they were also honored to be a part of the collaborative release "The Hangout" by production team SMKA (Trinidad James, Juicy J, Casey Veggies, Yelawolf, Nappy Roots, Pill) released April 20th 2013. Along with their extensive studio track record, their high-energy live shows are where the true essence of their musical ability shines. They have graced the stage with such artists as AraabMuzik, Too Short ,Nappy Roots, Problem, Jarren Benton, Cousin Dan, Hello Ocho, and Big Face Paper Gang to name a few, performing at such venues as The Knitting Factory in Brooklyn, Ny, Rex Theatre in Pittsburgh, Pa, The Masquerade in Atlanta, Ga, Noda Music Fest in Charlotte, Nc, Smith's Ole Bar in Atlanta, Ga, as well as countless other venues. Recently Goldyard was added as the opening act for Funk Volume recording artist Jarren Benton on his 16-city east coast My Grandma’s Basement Tour. During the month of Dec 2013, Goldyard made their debut into the BMX world through the Dan’s Comp Roll Call Dvd, which featured 3 of their songs ridden to by three of the top BMX riders in the world. They have also been featured on such popular music sites as Nahright.com, 2dopeboys.com, Worldstarhiphop.com as well as TRAPmusic.net.

Goldyard is far more than just a music group. It's a brand, a style, and a true way of life. With raw talent and unbridled determination, these three artists have come together not only to change the game of music, but to also write a new page in pop culture.