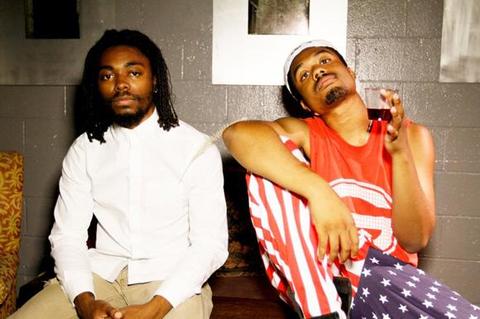 A musical reputation like the one Atlanta holds can play blessing and curse to up and coming artists. On the one hand, the city's rich history and vibrant creative scene provide constant inspiration; on the other,
established lanes and expectations can make it difficult to break the mold and get people to take notice. West Atlanta duo EarthGang isn't worried about fitting into easy boxes–they're happy to follow the drums, drugs, and ideas that inspire them most, whatever they may be. Rappers Johnny Venus and Doctur Dot would just as soon jam with the Arctic Monkeys and wake Frida Kahlo from her grave to do their cover art as they would fire up a Clipse record and rap along. “Atlanta's music scene has gone through so many changes in the past 15 years alone. When we started, everybody from the Westside was talking about trap music. There was only one type of sound you'd hear coming from Atlanta, one mainstream sound you hear. For us, there really was no blueprint,” says Venus. “Even if there was, we weren't about to follow it. We were just doing what we do, like people on the frontiers heading west: No one told them what to do. They set up shop and did it how they wanted to do it.” Most rappers probably don't cite molecular gastronomy or Pink Floyd's Live at Pompeii as muses, but Venus and Dot dedicate themselves to taking influence from the unexpected and bringing listeners into the worlds they're exploring. Whether observations about the decay of their home city, tales of intimate encounters, reflections on the younger years, or visions of their future, EarthGang vividly, viscerally renders the music of their minds. “When you listen to our album, we want you to feel like you're on a trip, like where you are now is exactly where we want you to be for that period of time.” A peak at where what they're working on might take you? “Our new music sounds like jaguars fucking in the jungle.”