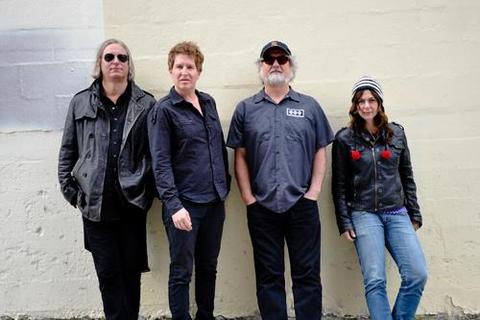 What happens when your band’s debut album is a run-scoring hit with both music and baseball fans? If you’re The Baseball Project, you grab some friends to fill out your bench, take batting practice by writing songs for ESPN and deliver a strikeout pitch with Volume Two: High and Inside. The new album from Steve Wynn, Scott McCaughey, Linda Pitmon and Peter Buck is another winning collection of songs about the game’s greats that will be pleasing to those who love America’s pastime — and fans of intelligent, melodic and fun rock.

When the first Baseball Project album, Volume One: Frozen Ropes and Dying Quails, was released in 2008 Wynn, McCaughey, Pitmon and Buck had yet to play one note as a unit in front of an audience. But after playing throughout the U.S. in 2009 the quartet were — as McCaughey jokes — “a well-oiled touring machine,” which allowed the band to complete the basics for this new album in just two days. Wynn adds, “We definitely knew how to play as a band when we went in this time and I think you can hear that chemistry on the record.”

High and Inside is a collection that sees the quartet deftly mix witty lyrics about baseball players past and present with a sharp melodic sensibility and engaging choruses. Opener “1976″ is one of the catchiest songs to ever be written about anything from Detroit. (In this case, it’s Tigers phenom pitcher Mark “The Bird” Fidrych.) “Ichiro Goes to the Moon” is a manic punk-pop track that marvels at the Seattle Mariners outfielder’s ability to eat, build rockets, and yes, play baseball. High and Inside also explores more musical avenues than the first Baseball Project outing. “Pete Rose Way” is a slice of alt-country that echoes one of McCaughey’s and Buck’s other projects, Tired Pony. And closer “Here Lies Carl Mays” takes the story of the only pitcher to throw a ball that killed another player and turns it into a haunting ballad sung from beyond the grave.

“Fair Weather Fans” describes the band’s widespread allegiances to the Giants, A’s and Mariners for McCaughey, the Dodgers and Yankees for Wynn, and the Twins and Yankees for Pitmon. Yet the team most represented on High and Inside is none of those — it’s the Yankees’ rivals the Boston Red Sox. McCaughey imagines a world where Bill Buckner’s legacy wasn’t tarnished by a groundball in “Buckner’s Bolero.” Wynn sings of a different tarnished legacy in “Twilight of My Career,” which explores the glorious but sordid post-Sox career of Cy Young award-winning pitcher Roger Clemens. And “Tony (Boston’s Chosen Son)” is a violin-driven piece that recalls Bob Dylan’s Desire as it honors late beloved Boston player and announcer Tony Conigliaro. Wynn admits, “It’s weird that a Yankee fan like me would end up writing more about the Red Sox, but tragedy just makes for better songs and stories than a litany of successes.”

The quartet invited a lot of their friends to help out on Volume 2. Wynn explains, “We had wanted to include some like-minded baseball rocker pals on the first record but there just wasn’t time so we were able to open the door this time around.” Into that open door came contributions from Death Cab for Cutie’s Ben Gibbard (who adds backing vocals to “Ichiro Goes to the Moon”), Los Lobos’ Steve Berlin, The Decemberists’ Chris Funk and John Moen, Yo La Tengo’s Ira Kaplan and The Hold Steady’s Craig Finn, who supplies lyrics and the lead vocal on the Minnesota Twins anthem “Please Don’t Call Them Twinkies.” Twins fan Pitmon had bonded with Finn over the team when the Minnesota natives reconnected in New York. And Pitmon says she was thrilled when Finn accepted the job of writing lyrics about their favorite team. She explains, “I think Craig perfectly captured the feelings that a lot of us Twins fans have for our team of humble, hardworking guys that seem to beat the odds more often than not, and Steve really nailed the mood of the lyrics when he wrote the anthemic tune we set it to.” Finn says, “The Twins don’t win every year, or even every decade. They don’t normally compete in the off-season arms race — they develop talent. Thus, when they do win I get to feel elation and bliss, and not just relief. In some way, it’s like music; many of my all-time favorite bands aren’t that great every night, but when it comes together it feels even sweeter.”

The success and critical acclaim of Volume One opened up new opportunities that these veteran musicians never imagined. McCaughey is still amazed they appeared on the long-running weekly Major League Baseball program This Week in Baseball. “I can’t say I ever thought I’d hear or see myself on TWIB — that was awesome,” McCaughey exclaims. “As a kid I dreamed of it, but I would have been making a diving catch in the outfield instead of bashing on an electric guitar.” The band also struck up a relationship with ESPN that saw them launch The Broadside Ballads series. Wynn and McCaughey took it upon themselves to write and record a song per month for the 2010 season that were available as free downloads at ESPN.com. Wynn says, “It’s very exhilarating and also exhausting to come up with tunes based on the calendar rather than the muse, especially since we were all busy and on the move with our own projects throughout 2010 but that made it even more fun. I loved that songs would begin in Virginia, for example, get shuttled off to Berlin, back to New York and then over to Portland all within a few weeks.”

The Baseball Project was born out of McCaughey and Wynn discussing their love of the game over dinner and drinks a few years ago. “It finally took flight at the R.E.M. pre-Hall of Fame induction party in New York,” Wynn remembers. “Everyone was happy. The wine was flowing, the food was incredible and spring training had just started. Scott and I talked baseball until most of the party guests had cleared out. And we actually remembered it the next day.”

Both Wynn and McCaughey’s love of baseball and its legendary players made its way sporadically into songs during their distinguished careers. The Young Fresh Fellows named-checked Seattle Mariners slugger Gorman Thomas on “Aurora Bridge” from 1986′s Refreshments, while Wynn tipped his cap to Hall of Famers Mickey Mantle and Stan Musial in his 1990 solo hit “Kerosene Man.”

So with another Volume down, the question needs to be asked — will there be a Volume 3? McCaughey says it’s a certainty, since he still wants to write tunes about “Ted Kubiak, Butch Huskey, Don McMahon, Don Moss, Kris “Iron Man” Benson and Wilton “Peanuts” Guerrero.” Wynn adds, “Just open the Baseball Encyclopedia or the 2011 MLB press guide to any page. There are still plenty of tales to tell.”