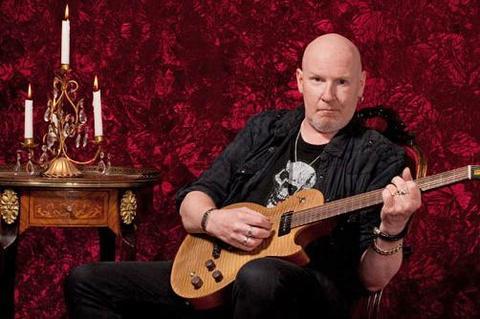 It's a long way from CBGB to the Grand Ole Opry, and Nashville might not be the first town that comes to mind when you hear the name Cheetah Chrome, but the iconic punk rocker has actually called Music City home for more than 15 years. Chrome, who rose to fame as the guitarist for seminal 1970's bands Rocket From The Tombs and The Dead Boys, never really expected to wind up there either.

"I came down to Nashville to do some demos," says Chrome, "and I was supposed to be here two weeks. I liked the place and decided to stick around and take a little vacation. I liked it better and better and ended up meeting my wife, and I just never went back. I still have my expired return ticket."

It was in Nashville that Chrome launched the latest chapter in his storied career, Plowboy Records, after a chance connection with Shannon Pollard, grandson of country legend Eddy Arnold. "I remember hearing him as a kid on the radio," says Chrome, who grew up in Cleveland before moving to New York City at the urging of Joey Ramone. "The Beatles, Eddy Arnold, and Elvis were the three big ones. I wasn't a big country fan and I never gave him much thought until I was down here in Nashville."

Pollard explained the importance of preserving his grandfather's legacy and pitched Chrome on producing a sprawling Eddy Arnold tribute record. "I started really listening to him, and the music was amazing," says Chrome. "His voice and his records are so distinct." Tired of life on the road and looking to spend more time at home with his wife and son, Chrome agreed to spearhead the project, and Plowboy Records (dubbed so in honor of Arnold's nickname, The Tennessee Plowboy) was born.

For the record, Chrome assembled a cast of musicians including Bobby Bare, Jr., Frank Black, Jason Isbell, Alejandro Escovedo, Mary Gauthier, and Pokey LaFarge among others. "I enjoy a good challenge," he explains, "and I really enjoy being in the recording studio. To produce a record with that many artists was something I just couldn’t resist."

With the help of Plowboy's third founding partner, the professor and country music historian Don Cusic, Chrome recorded much of the album in Nashville's famed RCA Studio B. "The way they used to record the old RCA stuff was amazing," Chrome adds. "Eddy was one of the reasons they brought RCA down to Nashville in the first place, so he wouldn't have to travel to New York."

While promoting Arnold's legacy is at the core of Plowboy's mission, their catalog expands beyond their namesake, and with Chrome in the role of Creative Director of A&R/Director of Special Projects, the label has released albums by Bobby Bare, JD Wilkes & The Dirt Daubers, Paul Burch, and even Chrome himself. "I think one of the main things that makes Plowboy different is that we're all really fans," he explains. "We all really love music and we're not necessarily in it to find something commercial. We like things that are different. So far we've charted well with all the records, but we're in it for the music and for the art."

That dedication to music has guided Chrome for roughly 40 years now. In 1977, he released his first album with The Dead Boys for Sire Records, 'Young, Loud and Snotty.' The record kicks off with "Sonic Reducer," a track co-written by Chrome and described by all All Music Guide as "one of punk's great anthems." CBGB owner Hilly Kristal managed the band, and their riotous and raunchy performances at the club were the stuff of legends, as was their wild reputation off stage (by his own account, Chrome overdosed and was pronounced dead three separate times).

Following The Dead Boys' breakup in 1979, Chrome remained in New York for another decade, recording and performing with everyone from Ronnie Spector to Sylvain Sylvain to The Stilettos. In 1996, he relocated to Nashville, and it was there that he began writing his memoir, 'Cheetah Chrome: A Dead Boy's Tale From The Front Lines Of Punk Rock.' "A friend of mine works at a publishing company and kept saying, "You've got to write a book. Send in a sample chapter and let them read it. I bet you get a deal,'" Chrome remembers. "Finally I said, 'Fine, I'll shut her up and I'll do a sample chapter and they'll reject it and that'll be it.'" Only it didn't get rejected. "Next thing I know they're calling me saying, 'Let's do a book,' so I had to write the damn book," he laughs.

The autobiography received a warm critical welcome, and stories from it made their way into the 2013 film 'CBGB,' in which Chrome was portrayed by Rupert Grint. "We went to the set and walked in and Rupert was up on stage playing me," Chrome remembers. "He looked the part, he was great, but it was strange. I gave him a couple tips, but he really had it down before we met. I'd be walking across the set and look over and there's 'me' in the chair," he laughs.

It's a surreal moment, to be sure, but just one of many in the long strange saga of Cheetah Chrome, a man who's been a punk rock pioneer, an author, a producer, a record executive, and a husband and father, and lived to tell the tale.