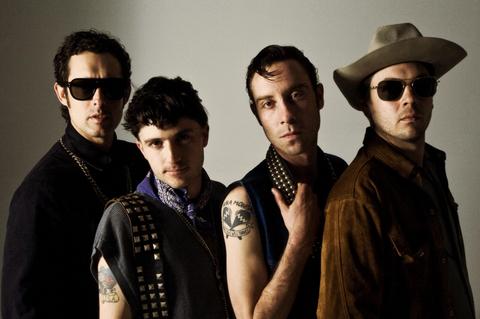 Listen to Boys in the Wood

Atlanta's beloved sons the Black Lips entered last year through a screaming cloud of sweat, smoke, blood, and beer mist, in front of a dangerously packed hall in New Orleans' French Quarter. If a band's bipolarity runs on a touring vs. recording-an-album spectrum, then the previous year was the mother of all manic spells.

After a spring and summer running the usual festival circuit in North America and Europe, the Lips embarked on a two-month fall tour of the Middle East. They were tailed by Georgia rock-doc royalty Bill Cody, of Athens, GA - Inside/Out fame, who filmed the band playing for kids in Tunis and Cairo who had just overthrown their government, kids in Iraq who barely have a government, and kids in Dubai whose government is richer than God (and might control a genie).

As Cody assembled his footage into the feature Kids Like You and Me, the band returned home from the New Year's maelstrom and began settling into album mode. Songs had piled up in the two years since 2011's Arabia Mountain. "We went into the studio with about 80% of the record written," says bassist Jared Swilley. "which is a little more than usual for us. Joe (Bradley, drums) usually puts together all the parts for his songs on his own, and Ian (St. Pe, guitar) writes a lot of his music. I like to make mine a little more collaborative, like Cole (Alexander, also guitar)."

Recording for Underneath the Rainbow ("We were going to call it The Dark Side of the Rainbow, then we googled it and realized that's what they call that thing where you watch The Wizard of Oz while listening to Pink Floyd and it syncs up") was split between New York with Thomas Brenneck, who was recommended by Arabia Mountain producer Mark Ronson, and Nashville with the the Black Keys' Patrick Carney, who offered to help produce in a Mexico city hotel room just before dawn. "It was one of those super-late-night/super-early-morning drunktalk sort of situations, so we weren't sure if he meant it," explains Jared. "People do that all the time."

Early internet conjecture, based around on the album's lead single ("Boys in the Woods"), Carney's choice of a country studio in Nashville, and an offhand reference to "roots music," pegged Underneath the Rainbow's sound as a blend of southern rock with throwback C&W and blues. Which is a weird description for a record containing the first Black Lips' song with a prominent synth ("Funny"), and even less apt for an overall album that owes just as much to the kiwi pop of New Zealand's South Island and the Chicago South Side's Crucial Conflict as it does the standard American South. "They got it all wrong," says Jared, "they were asking 'Is there a "radical departure" or "new direction" on this album?' so I said, no it's still roots music, which is what we've been doing from the start and which all rock and pop music derives from."

"Although ["Funny"] is a new direction as far as it having more of a commercial sound," adds Cole.

"Honestly, that synth getting in there was a fluke."