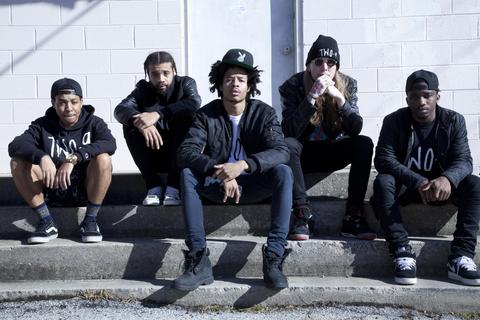 To let historical slogans tell it, numbers are pretty damn important and have an impact on everything we do. No one is more aware of this than the members of rap collective Two-9.

Consisting of rappers Curtis Williams, Retro $ushi, FatKidsBrotha, and an extended family of rappers, DJs, photographers and other creatives, Two-9 is not only a walking billboard of what is now and next out of their hometown of Atlanta, but from their generation period.

The rap outfit began to form in 2009, a time when Atlanta’s youth and creative underground we looking to find a way to unify and make their presence known, while the city’s bigger stars were moving farther away from each other and even farther from the streets that birthed them.

Founding member Curtis Williams was already making music, but through parties and other social circles he would meet Ceej and Jace of Retro $ushi and start vibing with each other. The brother tandem of Dave and LightskinMac 11, better known as FatKidsBrotha sought out beats from Curtis, but wound up hanging out with the growing crew as well.

Before long, the loose-knit group not only started becoming bigger fans of each other’s music, but also started spending more and more time around each other and becoming family in the process. By 2009 most of the clique had already released their own independent projects and began to build their own fanbases. Seeing that they could move stronger as a fist instead of as separate fingers, a decision was made to officially become Two-9, the name representing the year they came together.

The years that followed included each member continuing to put out their own music and videos via the web and supporting it with performances throughout their hometown of Atlanta. In 2012, they dropped their debut mixtape, Two-9 Forever, officially introducing themselves and putting the rap world on notice of the takeover that was about to happen.

Hosted by crew member DJ Osh Kosh and powered by the lead single “Scottie 2 Hottie,” the mixtape became a blog world favorite and boosted the profile of every rapper featured, including Two-9 affiliates Money Makin’ Nique, TheCoolismac and others. The diversity in sound ranging from hazy to hard, introspective to ignorant, gave listeners an enjoyable ride into what rap’s next superpower sounded like. Along the way, Two-9 members have also become highly sought after producers working with fellow underground artist as well as the the established veterans like Juicy J. Backed almost exclusively by in-house production, the collective has been compared to everyone from Wu-Tang Clan to Odd Future, because of their ability to stand out alone, but shine together as well.

In their short time together Two-9 has already graced a number of stages all over the country in front of a wide range of audiences including The Twilight Concert Series in Salt Lake City, Utah to the Trillectro Music Festival in Washington, D.C. The group has also rocked music festivals like South By Southwest, CMJ and A3C. Now, with their new hit “Where The Money At?” produced by platinum hitmaker Mike Will Made - It , Two-9 is catching the eye of brands like Hennessy, Scion and Bud Light, all of whom have invited the clique to perform at their events.

Where many new crews in Hip Hop’s current landscape rely on wearing trendy clothes to stand apart, Two-9 sets their own trends, starting with their new Two-9 clothing line set to hit the web this fall.

Even though Two-9 has only been in existence for four years, their energy is sure to be felt for more years. With no radio or television play, the collective has already been featured on XXLMag.com, Complex.com and even made it to Beyonce’s personal blog. With their t-shirts beginning to pop up being worn by top players in the music industry already, it’s probably time that you start paying attention.