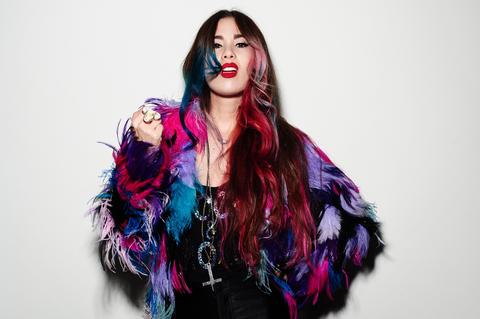 "Alexandra Starlight bears the lucky distinction of being as captivating as she is talented. Her singing style rivals the greats like Tina Turner and Janis Joplin. And she's got the swagger of a thousand men.”- Guitar World Magazine

Alexandra Starlight got her start in the Los Angeles music scene in 2004, when she joined The Holograms as lead singer in support of their release "Night of 1000 Ex Boyfriends," produced by Blag Dahlia (The Dwarves) and Bradley Cook (Foo Fighters/The Ataris). Called"bubblegum rock & roll for grrrl-power girls" by the LA WEEKLY, their single "Are You Ready for It" was named one of the Coolest Garage Songs by Little Steven's Underground Garage column and charted on the top 10 Billboard Magazine garage rock chart hit.

She then formed The Hollywood Harlots in 2006, which was called the "gritty spawn of The New York Dolls and the dirty girl appeal of Kim Fowley’s young swagger street chicks-The Runaways" by SUGARBUZZ MAGAZINE. The recording project landed Starlight a deal with producer Jeff Saltzman (The Killers, The Sounds).

Along with CD, Alexandra & The Starlight Band was released in a never-before-made combination of clear vinyl/rainbow glitter, each painstakingly custom made & hand numbered. Entirely crowd-funded, the release garnered an overwhelming response on the creative platform Kickstarter—resulting in over 205% funding and the limited edition 7” being nearly sold out, months before its release.

"Alexandra & The Starlight Band" has charted on multiple non-commercial radio stations, reaching as high as #2. She spoke on the panel "Modern Merch" at CMJ 2012 on the success of the marketing & branding of the vinyl 7".

"Rushes through the speakers and has all the strength and emotion of Motown’s finest, but also bears its soul with the intimacy of a Southern gospel record...then, Starlight’s smoldering vocals kick in. And I try to pick my jaw up off the floor. It’s just that good." - Guitar World Magazine

Sonically, the 5 song EP presents a fresh spin on classic American music; hearkening back to the golden period in the 1970’s when rock ‘n’ rollers were looking to the sounds of Motown, R&B, funk and soul for inspiration. In the swinging “Without My Sunshine,” Starlight muses on the proverbial calm after navigating a stormy sea of heartache, with a bittersweet sense of gratitude, set to the sounds of gospel backing vocals and a classic Stax Records style horn section. Yet Starlight stands strong and never plays the victim; in the funky & heavy-hitting “T.T.M.F.” she trash-talks her two-timing ex-lover, positioning herself as the victor in her own superhero-esque survivor theme song. The result is a collection of songs that are at once triumphant and vulnerable, introspective and searching, strong and sassy.

"The moment Alexandra belts out her first syllable the audience is under her control. The band stands out partly because their sound is hard to explain, think white Tina Turner, with some Janis Joplin and Joan Jett thrown in for good measure." - Desert Star Weekly Newspaper

Alexandra Starlight’s live show matches the intensity of the songs, earning her a reputation as an artist to watch. She has performed for television, including the David Letterman Show and Fox 11 News' Good Day LA. She has played alongside artists such as Semi-Precious Weapons, Kate Nash, Orlando Napier, Amy LaVere, Trixie Whitley, Intronaut, Jhene Aiko, Vanaprasta, Harriet & Black Math Horseman, at notable LA venues such as The Troubadour, Hotel Café & The Satellite. In 2012, she performed at SXSW for a showcase curated by the Miles Davis family.