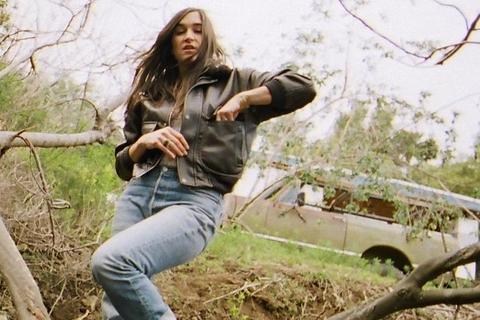 Automechanic is the appropriately titled debut full-length by Los Angeles
artist Jenny O. A great distance from her Long Island, New York beginnings
on the now critically praised EP "Home," Jenny O. has refined her
songwriting to a well-oiled machine. With touches of noteworthy Los Angeles
mile-markers like Harry Nilsson, Ricky Lee Jones, Randy Newman, and Carol
King, her playful attitude towards life shines here in sweepingly poignant
songwriting and lyrical delivery. Honest diatribes and insightful glances of
life, love and the adventure of Los Angeles radiate in her songs.
Automechanic is metaphor for taking the wheel, self sufficiency and the
courage of artistic honesty. Upon first listen to Automechanic, the nature
of Jenny O.'s vision rings clear. She wields a creative confidence, open and
bare in her expression, but inviting, mirthful, and fun.

Automechanic is a diverse yet cohesive collection of songs, where Jenny O.
weaves through spirited guitar jams a la Neil Young like the album's title
track “Automechanic” or the kindred J.J. Cale-styled number "Good Love." An
inadvertent talent for truth enables her to deliver sheer vulnerability in
songs like "Sun Moon and Stars" where she declares with bravura and clarity;
"And when I get to crying instead… over something you said…I'll stand by the
blues… I'm gonna use em… I'll make a note not to abuse em."

Jenny O. taps fearlessly into a bevy of styles here. The 70's R&B-inspired
"Lazy Jane" is a tale of relationship dissolution leaving one immobile with
heartbreak and regret. In turn, "Get Lost" rolls with a modern folk and
country throwback: arpeggiated chords under a slow-burned melody that
lyrically offers the safety in just letting go. "Come Get Me" may be Jenny
O.'s most adventurous tune of all, delving into far-out guitar tones,
unabashed drum fills, and joyous background harmonies.

Jenny O.'s wistful spirit has kept her constantly writing, recording and
touring, and with the release of Automechanic on Holy Trinity / Thirty
Tigers on February 5, 2013 there are no plans to slow down, only speed up.