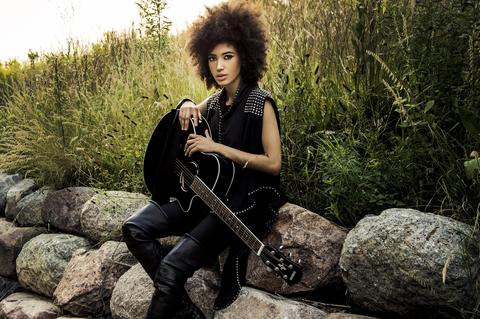 Andy's new solo album, Superconductor, has people calling her a refreshing songbird with a bright funk soul. Even her peers can't stop singing her praises. Says R&B vocalist Ledisi, “After eight bars of her first song, 'People Pleaser', I realized that I had stopped breathing. Andy's songwriting is so refreshing, and vocally, she does just enough gentle gliding through her melodies. Her lyrics say it all, and the musicianship on this project reminds me why I fell in love with music."

Superconductor is indeed “all that” and so much more. The album is the sophomore effort of a young artist who is clearly going to be here for a long time, and the start of something musically fresh. Says Allo, "I created a genre called Alter.Hip.Soul for my first album, UnFresh (2009), whereas the compositions for Superconductor incorporate a variety of layers and a whole lot of Funk."

Andy, who hails from Cameroon, Africa, had her first introduction to a musical instrument through her piano-teaching mother who taught her at age seven.

Andy, who joined Prince's New Power Generation in 2011 as singer/guitarist, co-wrote three of the album's nine tracks with Prince – "Superconductor", "The Calm" and "Long Gone" – who also provided the larger-than-life musical arrangements for all tracks and served as Executive Producer.

Andy wrote the remaining six songs on the record and enlisted the help of some legends to make her sound complete. Legendary saxophonist Maceo Parker and Trombone Shorty play on the reggae-influenced "If I Was a King", and the infectious lead single, "People Pleaser". The result is an album that ranges from expansive, multi-layered songs with a full, big sound and lyrical depth.