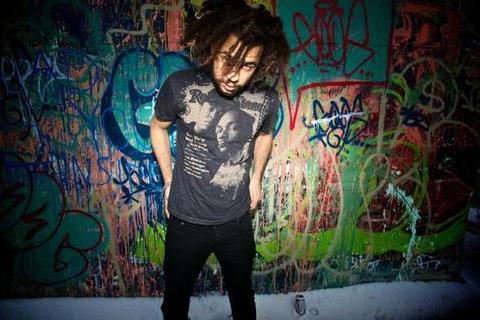 So frequently do Ivy League schools profess to nurture the most creative minds of the day, but the real treasures of hallowed halls, and the ones far less heralded, are the students who’ve broken from the shackles of academia to forge their own paths to victory. Max Burgundy is one such hero and also one of an infinitely smaller fragment, an Ivy alum who can rap his ass off.

Burgundy, a Bronx native whose bout with formal education ended when he was dismissed on a drug distribution charge, spins tales rooted in nostalgia and anger, hacking down concepts like classism, racism and "the idiots that continue to perpetuate both."

Though he'd go on to spend his high school years in Southern California, Burgundy remembers vividly the New York of his childhood, from graffiti-plastered subway cars to roach infested apartment buildings replete with pissy hallways, the grimey and at times frightening reciprocal to the current hipster metropolis. "It started [when I was] in the BX," Burgundy says. "Like the shit that always struck me the most was that Pre-Guliani, Dinkins/Koch era of New York City that really doesn’t exist so much anymore, that shit just kind of lives within me. I feel like I carry the torch for all those people…"

As Burgundy's music carries all that weight today, at one time he rapped exclusively for the most honest of inspiration, the fairer sex. "I rapped to this one girl in like the 6th grade and she was really with it so everyday, probably for a month straight, she was kind of like my first incentive to rap," he says. "I just had a new freestyle everyday for her." Burgundy’s youthful optimism was shattered, however, with the murder of his father across the street from his Bronx home. His mother, a single parent librarian, would uproot the family to Cali where Burgundy's lust for life was hurled toward the West Coast's notorious gang culture, a tragic distraction from a promising basketball career. He'd go on to coast through high school, "sleeping in" during his SAT's, but it was at community college, a place he’d gone to further his hoop dreams, where Burgundy would discover his academic drive. Laboring over philosophy texts late into the night, Burgundy worked his way into an to Ivy League Education, only to find out that higher education didn't hold his destiny.

What Max Burgundy couldn't find between book covers though, was the music he'd carried within, the message he had for the world. Today Burgundy's music reflects a worldly sensibility, his rhyme style drawing influence from his New York roots as well as the time he spent in Southern California rapping under the tutelage of West Coast legends like Mitchy Slick and Murs. Burgundy has studied writers from all walks, from French philosopher Descartes to "everything ever written" by classic American novelists Norman Mailer and F. Scott Fitzgerald. "I wake up, I’ll go pick up a new book, I’ll go teach myself something," Burgundy says. "I’ve always had that mentality." Whether talking pop culture or the idiosyncratic behavior of the women he dates, Burgundy can play everyman, speaking sense to relationships and the peculiar and sometimes detestable ways people treat each other.

On The Murder of Mark Fuhrman, Burgundy's breakout mixtape, the rapper bears his soul through a gaggle of flows, touching on the strained relationship with his mother on "Momma Tol Me," coming off like an enlightened LL Cool J on the flowery "A La Mode," and delivering an irie free association in "Want Some." The Murder of Mark Fuhrman is the latest manifestation of an altruistic life view, the artist using his art to heal and to inform. "I rap because it’s a way for me to tell my story," he says. "I have an obligation to do it because I know there are other people out there who have been like me, making a decision about whether to sell drugs… I rap for that kid. I rap for that loner, those people that really feel like they don’t have anything else, and not only necessarily in the way that other people don’t have anything and they decided to go and be hustlers… but for that person that was always overlooked, that person that was born a loser, that person that was supposed to fail and is expected to and just doesn’t want to accept that."