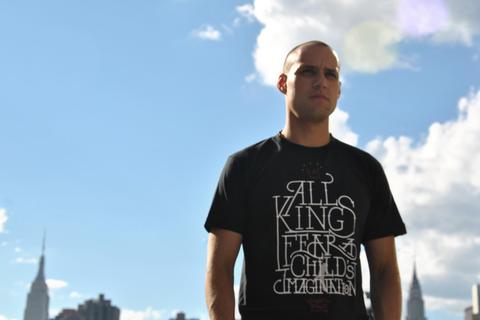 Listen to I Get Busy

In 2012, Jamieson's lead single, "I Get Busy" was:
- Featured on MTVIGGY.com
- Playlisted on MTV Base
- Declared a "Hot New single" by MySpace.com

The decision to pursue ones dream can sometimes be difficult, wavering between security and uncertainty, what we know and what we don’t. So more often than not we err on the side of caution to avoid the unknown. Jamieson on the other hand, chose the path less traveled, deciding to leave everything he knew behind to pursue his career as an artist in the US. Fortunately for Jamieson, emigrating from the UK is proving to have been a wise decision. Though it has not been easy, he has already begun to make a name for himself.

Jamieson born Gordon Jamieson Jr. is a London born and bred rapper, writer and producer that can be described as a storyteller who descriptively narrates his life experiences through his music. His concepts come to life through a combination of catchy hooks, witty punch lines and vivid imagery, creating a dynamic mix of entertaining and introspective Hip Hop.

For Jamieson growing up in Kilburn, a multicultural London district, with his Colombian Mother and Scottish Father has been beneficial for him not only as a person but also as a musician. His exposure to so many different cultures growing up introduced him to various musical genres, influenced by everyone from Cypress Hill, WuTang, Bruce Springsteen, The Beatles, Rod Stewart to Salsa group Los Hermanos Lebron, Nina Simone and some of his own peers currently on the rise.

He first stepped into the world of music as a producer at the age of 15, a move that was more recreational than career oriented at the time. Unfortunately he struggled to get artists into the studio to rhyme over his beats, so instead of wasting his time he decided to try rhyming over his own beats. After a couple of years, around the age of 18 he and his peers began to notice his talent, ultimately beginning his transition from producer to rapper.

Jamieson formerly known as “Killagram” began actively pursuing his career as a rapper at the age of 21, when he began rhyming with longtime friend K.I.N.E.T.I.K as rap duo “Twisted Thoughts”. While he held regular day jobs, which included a desk job at a local hotel and a teaching position at a local school in the evenings to non-English speakers, his music was always his main priority. He performed several nights a week as a part of “Twisted Thoughts,” and they gradually made their way through the UK’s underground Hip Hop scene, eventually leading them to perform at what could be compared to the Hip Hop version of American Idol in the UK.

Jamieson did well for himself in the UK, but always felt his opportunities were limited because there really was no “lane” for his kind of Hip Hop, which was different than “Grime,” the UK’s adaptation of hip hop. Jamieson always believed success in London would only take him so far, but making it in New York could mean an even greater level of success.

In 2005 success in the US finally became a real possibility, when Jamieson was offered an opportunity to intern at a well-known record label in New York City. While apprehensive at first, the final push towards NYC came after he spotted a British Airways Ad for flights from London to New York on his way back from a job interview. He took the Ad as a sign, booked his flight two days later, and arrived in NYC one month after that. For the first year Jamieson stayed in Jersey before finally settling in the NYC’s South Bronx, which he’s called home for the past couple of years. The internship which got him a foot in the door eventually became a full time gig and his personality, hard work and talent have helped him survive, and work his way within the industry.

In 2007 Jamieson released his first mix tape entitled “The Foreign Exchange,” hosted by G-Unit’s own DJ Whoo Kid. After that he took some time to focus on what would be his next project entitled “I Came, I Saw Vol. I-III”. This trilogy of EPs includes production and collaborations from the US and abroad.

In 2010 he released I Came, I Saw Vol. I via DJBooth.net, which included tracks featuring Skyzoo and Emilio Rojas. Later in 2011 he followed up with volume 2, which included features by Sean Price, Samuel and Joell Ortiz. In the midst of releasing I Came, I Saw he also made his rounds performing at different venues and events. He performed at Think Pink Rocks consecutively the past 2 years, opening for artist such as Melanie Fiona, FloRida, Sean Kingston and Akon. In November 2011, he also had the opportunity to open up for Mobb Deep at the legendary SOB’s in NYC for Hot97’s Who’s Next series.

Jamieson has received a great deal of support thus far and continues to be featured on several major websites and Hip Hop blogs in the US and abroad which include XXLmag.com, Thisis50.com, Hiphopdx.com, 2dopeboyz.com, OnSmash.com, TheHipHopChronicle.com, Hip-HopKings.com, Nahright.com and Grime daily. Jamieson is determined to make his mark, and his commitment and hard work are already paying off, this is definitely only the beginning for this London storyteller.