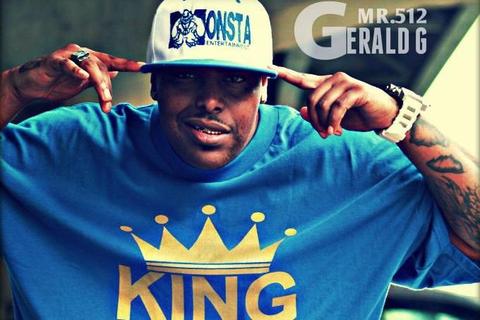 When Austin, Texas rapper Gerald G declares “only dream I ever had was put the hood on the map,” he’s making it his primary duty to take hip-hop back to its territorial essence. Gerald recognizes the value of rap music as a means to instill pride within an entire community otherwise left for mandated decay.
Gerald G was born in Compton, California, yet moved to Austin’s historic Eastside when he was merely 4 years old.Gerald G established Monsta Entertainment in 2003 as his self-owned vehicle for business ventures done on his own terms. He forcefully emerged as Austin’s most frequent show-stopping freestyler as he demanded the spotlight opening for many major main stream artists.

In February 2007, he released his mixtape Mr 512, expressing the full extent of his narrative talent, garnering critical acclaim. That same month he was nominated for "Mixtape of the Year", "Artist of the Year" and "Video of the Year. Gerald G previously released several mixtapes, including "Whats Really Hood",with Dj Rapid Ric and Texas 2 Cali,with Dj Grip. He also has had guest appearances from major recording artist, Chamillionaire, Mr Fab, Dorrough, Lil Boosie, Chalie Boy, Bun B, Fonzworth Bentley and T-Pain. He is a frequent collaborator with all artists. In March 2007, Gerald G opened for Slim Thug and UGK at SXSW in Austin Tx.

In 2009, Gerald G opened for Bun B, Lil Wayne, Z-Ro, UGK and the Grammy award winning Three 6 Mafia.He also was chosen to record a Intro for Austin's radio statio 93.9, which played everyday at 3pm. In March 2010, Gerald G opened for Killer Mike, Rick Ross, David Banner an Nipsey Hustle. He was also nominated for "Artist of the Year" and "Best Collaboration" that year. In 2011, Gerald G became the First Local artist to open at the Frank Erwin Center in Austin Tx, alongside of major label artist: Kreayshawn, Fabulous and Neyo.

In 2012,Gerald G also performed along side Twista,Big Sean and 2 Chains,

Slated to be released in 2012 by Monsta Entertainment , Gerald G's Album "I AM Mr. 512" guarantees to impress all! With road shows, multiple wig-splitting appearances, and yet another breath-taking Single: "Parking Lot Pimpin" feat. Dorrough, Lil Boosie & Chalie Boy.

Gerald G proves, the skies are nowhere near finished raining Gerald G’s brand of frenetic rap down from the heavens!