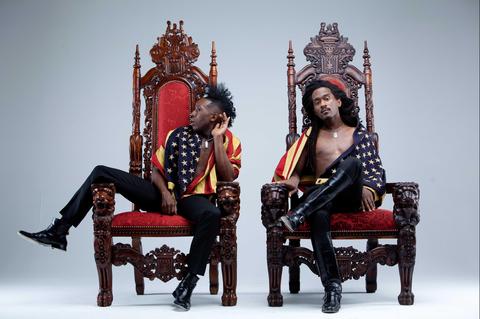 The band Deep Cotton got its start at OUTLANDIA, a communal farmstead in rural Georgia where freaks, hippies and computer programmers hung out with black beatniks, Baptist strippers and acid rock poets. In fact, the band’s hit song “We’re Far Enough From Heaven Now We Can Freak Out” was the original campfire anthem played nightly in front of the fireplace in the Boom Boom Hallelujah room.

Why the founding members of Deep Cotton—Nate “Rocket” Wonder and Chuck Lightning—jumped on Harleys and joined the punk rock motorcycle gang known as the Rolling Bones is still unknown. What is obvious is that they have been quite active in the Atlanta music scene—first, along with their illustrious partner in crime, Janelle Monáe, they founded an arts collective named the Wondaland Arts Society, and secondly, according to secret agents, they have recently been sighted smiling and dancing while wearing white plastic earbuds—certified proof that they are hard at work producing The ELECTRIC LADY, Janelle Monáe’s magisterial second album.

According to certain dubious sources, the duo have also been hard at work on secret products of their own: including, but certainly not limited to, a raucous suite of neck-snapping songs named RUNAWAY RADIO, as well as a full LP of epic anthems entitled I HAVE A SCREAM. Why Chuck Lightning and Nate Wonder seem to have an affinity for the year 1954, and why they are currently going door to door selling feminine hygiene products, and why they are selling blackberry preserves with the one word JAM emblazoned on the glass jars—the concrete reasons for all of these odd things is still unknown.