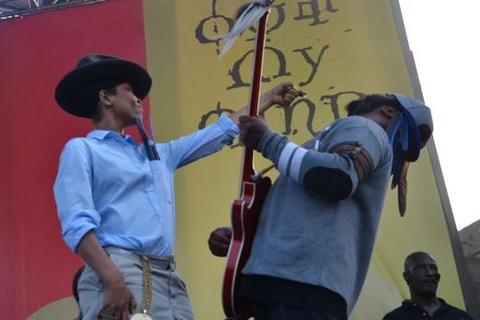 Erykah Badu is an American singer-songwriter, record producer, activist, and actress. Badu's career began after opening a show for D'Angelo in 1994 in her hometown, Kedar Massenburg was highly impressed with her performance and signed her to Kedar Entertainment. Her first album, Baduizm, was released on February 11, 1997. It spawned three singles: "On & On", "Next Lifetime" and "Otherside of the Game". The album was certified triple Platinum by the Recording Industry Association of America.
Badu's first live album (second overall), Live, was released on November 18, 1997. It produced two singles: "Apple Tree" and "Tyrone". The album was certified double Platinum by the RIAA. Badu's second album (third overall), Mama's Gun, was released on October 31, 2000. It spawned three singles: "Bag Lady", "Didn't Cha Know?" and "Cleva". The album was certified Platinum by the RIAA. Badu's third album (fourth overall), Worldwide Underground, was released on September 16, 2003. It generated two singles: "Danger" and "Back in the Day (Puff)". The album was certified Gold by the RIAA. Badu's fourth album (fifth overall), New Amerykah Part One (4th World War), was released on February 26, 2008. It spawned two singles: "Honey" and "Soldier". New Amerykah Part Two (Return of the Ankh) was release in 2010 and fared well both critically and commercially.
Musically her work includes elements from R&B, hip hop and jazz. She is best known for her role in the rise of the neo soul sub-genre. She is known as the "First Lady of Neo-Soul" or the "Queen of Neo-Soul". Early in her career, Badu was recognizable for wearing very large and colorful headwraps. For her musical sensibilities, she has often been compared to jazz great Billie Holiday. She was a core member of the Soulquarians. As an actress, she has played a range of supporting roles in movies including Blues Brothers 2000, The Cider House Rules and House of D. She also speaks at length in the documentaries Before the Music Dies and The Black Power Mixtapes.