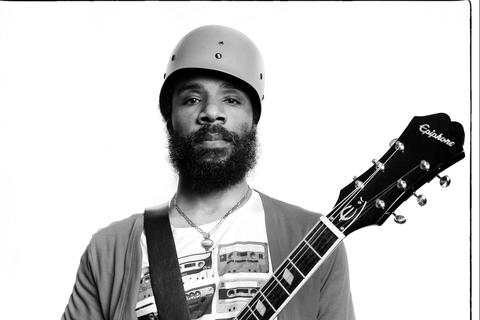 Universally hailed as a thrilling new figure in music for his edgy, lo-fi debut, The Headphone Masterpiece, back in 2002, Cody ChesnuTT is a soul troubadour whose frank, socially conscious ruminations on life continue to challenge popular notions of what modern soul music can look and sound like: a raw storyteller for the people wearing a guitar and a toothpick-chewing smirk; a wide-eyed, intense soul brother in a crazy-fly get-up singing about bedraggled love in the land of Lost Angeles - he’s all of that, but wiser now while still wearing poetic license on his skin like a battle scar. The Atlanta native has always stood his own creative ground ever since he first holed himself up in his bedroom to record The Headphone Masterpiece, armed with his DIY musical arsenal: a drum machine, an array of instruments, a dusty four-track cassette recorder and a giant pair of headphones to block out the world. The result was an unvarnished collection of songs – 36 in total, which alchemized his love of a multitude of styles: classic rock, rhythm and blues, pop, punk and gospel music.

A decade earlier, Cody explored the Atlanta’s early ‘90s R&B scene as a singer, and then toiled in his LA-based band, The Crosswalk. His time spent alone exploring raw new sounds in his bedroom finally paid off in 2002 with the release of The Headphone Masterpiece. Industry tastemakers like music writer dream hampton (and The Roots drummer and Late Night With Jimmy Fallon bandleader Questlove took to the record immediately, hearing in Cody’s music the kind of emotional intensity and savvy, irreverent wordplay that was sorely missing in Black music in the early 2000s as the neo-soul movement sputtered to a near halt, losing several of its key players to their own hiatuses. A song from The Headphone Masterpiece was re-tooled as “The Seed 2.0” for the Roots’ seminal album Phrenology, exposing Cody’s music to a wider mainstream audience. The song was nominated for two moonman statuettes at the 2003 MTV Video Music Awards, and his own album was nominated for the prestigious Shortlist Music Prize that same year. His fiery performance in Dave Chappelle’s Block Party added to his growing cult-fame status as an electrifying showman and daring genre-bender. The film was helmed by French video director Michel Gondry, best known for directing Eternal Sunshine of the Spotless Mind and his pioneering visuals for the alt-musician Björk. A fan of Cody’s music, he also directed the stunning video for “King of the Game,” a song from Cody’s 2006 one-man stage project “The Live Release.”

Landing On A Hundred, Cody’s second full-length LP, marks his return to the music game after a period of family-man retreat and reflection that did a world of good for him after his meteoric rise to near fame. The title is a reference to the slang saying, “Keeping It One Hundred,” or telling the whole truth, and for lovers of true blue Southern soul this new album is a must-have — he recorded it with a ten-piece band in Memphis-based Royal Studios, the sonic birthplace of some of the deepest works by soul and blues luminaries like Al Green, Buddy Guy and Ike & Tina Turner. “The original tracks were cut on two-inch tape,” Cody explains. “My hands were tingling because I got to sing on the actual microphone that Al Green recorded with. Nothing has changed. The downhome acoustic treatments are still in place.”

Topics on Landing On A Hundred cover lots of grown-folks business: a man’s road to redemption after years of womanizing and crack addiction, the power and labor of slow-burning marital love that eclipses mere material expressions of affection. Keeping it truthful is ultimately what matters most in Cody’s songs: how it reveals itself in your darkest thoughts, how it can heal old wounds with a handclap and a foot stomp. Truthfulness emanates from Cody’s vocal chords and the strings of his guitar while his , strong, sensitive voice continues to command listeners with its riveting sound, leading them to their own higher ground.