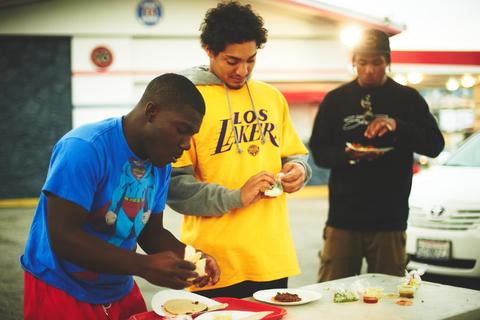 L.A. is home to music legends in every genre, from Rock to Classical to Hip-Hop and more. Now Ray Wright, Serk Spliff, and Manu Li have adjusted the California sound dial once again.

Friends during their years at Santa Monica High School, where their focus was primarily on sports and girls, the trio picked up their microphones in 2009. Fed up with the music on the radio and the direction of the mainstream, they’ve decided to donate their talents to Hip-Hop. They have a natural chemistry, and live in one of the most inspiring cities in the U.S. Those factors, combined with their willingness to show you their own ups and downs in life, are what make these three MCs worth listening to in an industry oversaturated with unauthentic artists.

From their first official project (Natural Spirit) to now, Warm Brew continues to make smooth, honest yet exciting hip-hop with an emphasis on the groove, the soul and the funk. The group’s music is firmly grounded in the 310, perfect for coastal cruisin’ and backyard barbeques.

Though Warm Brew might draw comparisons to groups like A Tribe Called Quest and other Cali acts like 213, the group welcomes those associations and remains flattered by them. Still, their work isn’t derivative in the slightest. Sure, they cover the familiar touchstones—women, weed, weather, etc.—but don’t get it twisted. Warm Brew raps about anything and everything, and their songs aren’t throwbacks as much as they are a fresh take on a timelessly potent formula. In other words, the group isn’t following in the footsteps of their influences, they’re an amalgamation of them, carving out a parallel path all their own.

With a strong fan base in their hometown, and fans in places as diverse and dissimilar as Boston and Mississippi, Warm Brew has performed all over L.A., opening for rappers such as Yelawolf, Schoolboy Q, and Warren G, in addition to doing shows in Arizona and the Bay Area. Music from their last two projects, Kottabos and Sippin All Day Last Night, has appeared on a number of Hip-Hop/music websites and TV networks (2DopeBoyz, DJ Booth, Pigeons & Planes, VH1, and more).

Warm Brew’s latest album, The Ride, is slated for release July 17, 2013. Working with producers like DeUno, Danny Dee, Al B Smoov, Lord Quest (Schoolboy Q’s “Figg Get Da Money”) and DJ Dahi (Kendrick Lamar’s “Money Trees”), it’s their most cohesive and fully fleshed out project to date, the beats and rhymes the best they’ve ever been.

For Ray, Serk, and Manu, the album marks a rebirth, a new beginning. It’s much deeper, much more mature than anything else they’ve done. The days of high school are long gone. They live, work, and rhyme in the real world, and feel the songs reflect this collective and personal growth. The Ride is an album concerned with the present. It’s about rolling with the punches and having a hungry grin on your face while throwing some haymakers of your own.

Accordingly, the guys agree this album is all about “embracing the journey,” taking life and music as they come. As with past releases, there are few features, and the listener gets pure, unfiltered Warm Brew. With sure to be modern classics like the laid-back “Loungin” and the smoker’s anthem “Wanna Get High,” The Ride is the vehicle Warm Brew believes will launch the next phase of their career.