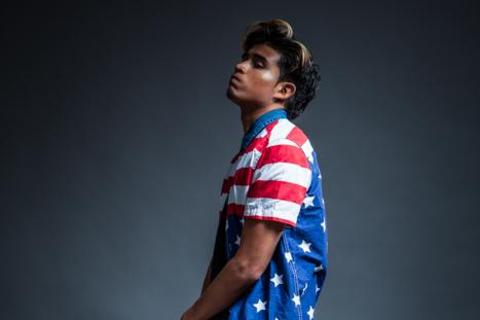 Birthed from inner city struggle almost 35 years ago, Hip Hop has grown to become a major cultural force. One overlooked struggle in music is that of the Mexican-American. Now that the art form is experiencing the greatest global exposure in its history, the door is wide open for a new story to be told and embraced. Eighteen year-old Kap G hopes to be the primary author of this story.

The youngest of six siblings born and raised between Mexico and California, Kap G grew up as George Ramirez in the Atlanta suburb, College Park. His mother grew up as an orphan while his father lost his own father to violence during his teen years. Looking for a piece of the “American Dream,” the couple left Mexico relocating to California to start and raise a family. After Kap’s older brother joined a gang at age six, the family realized the danger surrounding them, finding it necessary to relocate again, this time to Georgia in 1993.

“I don’t feel like I grew up like most Mexicans, I grew up in two cultures,” says Kap. “I was brought up in a Mexican household, but when I started school, I was out of my environment. There weren’t a lot of Mexicans in College Park, so I grew up around Blacks. I learned to get along with them. That experience makes me who I am today.”

Since he was a bit more “Americanized” than his older siblings, Kap G had no problem fitting in with his peers. In addition to spending time at the Boys and Girls Club, Kap played basketball and maintained his own personal style. The only difference was he did both better than most.

“When people see that you are a special person, they just want to be around you,” he says, revealing that he always felt like he was a star as a child.

In fact, the only time he didn’t find himself fitting in with his childhood peers was when it came to his musical tastes. Most of friends identified more with the then-underground star T.I. and other local Atlanta artists. Like most younger siblings, Kap took a liking to whatever his older brothers listened to. For him, this was 2Pac, Jay-Z and Kanye West.

Around this time in school, Kap noticed he excelled when it came to rhyming. As fate would decree, one of his friends started making beats on his computer, encouraging Kap to rap on them. With nothing more than a Rock Band video game microphone, Kap wound up recording music and taking his makeshift songs to school for his friends to hear them.

Unlike many new rappers his age, Kap opted to keep most of his music to himself instead of flooding the streets fresh out of the studio. In 2012, he spent the entire summer studying his craft, reading books on music, learning more about his heritage and focusing on becoming a better artist before trying to be the star that he wanted to be.

“When I started rapping, I didn’t know who I was or who I wanted to be yet,” he says. “I was just following the trend of whoever was rapping in Atlanta.”

After refining his skills, Kap began releasing music during his senior year of high school. He developed a following that grew from his school then to his neighborhood and finally to just about every teenager in College Park. Using social media, Kap tracked his songs and accompanying videos as they racked up views, with “Tatted Like Amigos” featuring Chief Keef nearing the 1 million hits mark.