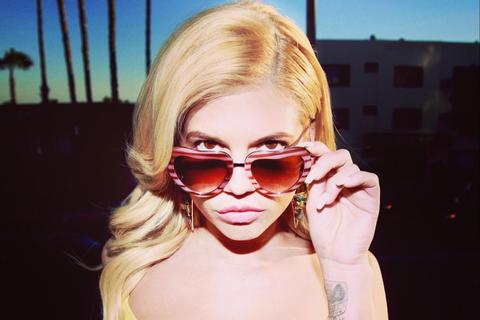 Of course, she's the sharp, smart, and saucy blonde from the MTV hit shows Rob Dyrdek's Fantasy Factory and Ridiculousness, but she's got a lot more up her sleeve than quick wit on-camera. In fact, her fierce and fiery flow will make you do a double take. Those impressive MC skills belie her sexy street chic style and high-fashion persona. You really want to get close to her though? Take her 2013 mixtape Now You Know for a spin…

Music came first for Chanel West Coast—born Chelsea "Chanel" Dudley. As a child, she took singing and dancing lessons with the encouragement of family. Later on, she'd eventually study violin as well, gaining formal musical training. Growing up, she split her time between North Hollywood with her mom and New York with her DJ father. Dad would even bring the eight-year-old along when he spun at packed nightclubs in the city. "I don't know what the clubs were thinking letting me in," she laughs. "I'd be in the DJ booth with him just watching everything. I was the tiniest kid ever so I don't even think anybody could even see me. I've always been around music, and I knew it's what I'd do for the rest of my life. I didn't have a choice" Immersing herself in hip-hop and picking up skateboarding in the process, she formally got behind the mic in none other than the legendary Marvin Gaye's Hollywood Hills studio. A friend had been recording there and invited her by to drop some verses. Despite feeling like the room was haunted, the atmosphere inspired her to go as hard as possible, pursuing that dream. At 17-years-old, she launched her first MySpace Music page under the name Chanel West Coast.

"I uploaded all of my music, and I spent all day every day adding people," she remembers. "I tried to network as much as I could on there, and that's how I became friends with Fantasy Factory's Scott 'Big Cat' Pfaff." As a result, she eventually met Rob Dyrdek who invited her to act as a receptionist and rap during a 2010 Carl's Jr. promo on Fantasy Factory. Music essentially provided her gateway into television. She killed it on her first episode and joined the series full-time. In between, she tirelessly gigged around Los Angeles and the rest of the country, increasing her fan base dramatically in the process. 2012 proved to be a breakthrough year though.

Lil Wayne personally invited her to his Miami studio to play some of her tracks. She left the meeting with a record deal, signing to Young Money Entertainment/Cash Money Records. The first taste of her YMCMB output is the irresistible "Karl", the first single from Now You Know. Lagerfeld himself would undoubtedly be proud of Chanel West Coast's impenetrable delivery and seductive swagger.

She admits, "I'm stepping out of the box and showing everybody who I am as an artist. It's ironic that people know more about my daily life than my music, but this song is really me. I love fashion, and it's a tribute to that. I'm not going to be satisfied until I reach the top."

Elsewhere on the mixtape is the undeniable anthem, "I Love Money". Coupled with its raw party video, the track remains something of a declaration for Chanel West Coast. "I'm not just saying I love money," she explains. "I love having a good time and doing dope shit like going to Las Vegas, popping bottles at the club, and looking fly. It's about having fun, going hard as a motherfucker, and getting money. I'm working my ass off, but I'm having an amazing time. This is the lifestyle. This is Chanel West Coast." She can do anything as well, whether it's light up a beat with a head-spinning rhyme or carry a pop hook. Chanel may be all about her fashion, but she grew up as a girl skateboarder amongst a bevy of guy skaters. It's another side of her. "I went from Tom Boy to Tom Ford," she laughs.

She relates some of that panache to quite the legendary connection, and it's the source of her nickname "Young Bonnie." "I'm related to the real Bonnie Parker," she smiles. "Bonnie Parker lived her short life to the fullest and did what she wanted no matter what—whatever the cost. That's how I live my life, sans the bank robberies and shooting. "

Ultimately though, Chanel West Coast is ready to be finally heard loud and clear. "This is who I am," she concludes. "I go through the same things everybody else does, and I'm rapping about real shit. I hope people feel that."