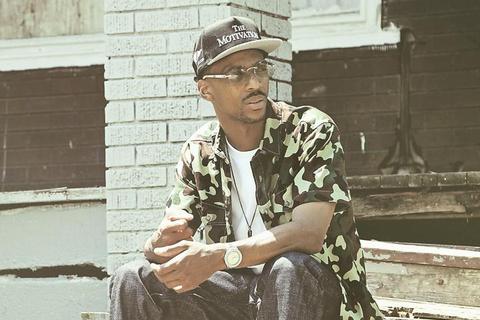 James Clay Jones III p/k/a Boldy James was born in August 9th 1982 in Atlanta, GA to his parents James Clay Jones Jr. and Toni K. Broadus. In 1983, Jones and Broadus returned to their original home of Detroit, MI with their son after Jones was wounded in the line of duty serving as a police officer. They resided on the Eastside of Detroit with James’ grandmother. In 1989, James’ parents separated and his mother sent him and his younger sister to live with their father to live on Detroit’s westside on Stahelin “Hell Block” near McNichols Rd and the Southfield Freeway.
James’ love for music came to the forefront at the age of 12, when he performed in a middle school talent show and begun writing his first raps shortly after. He attended high school at Detroit Cooley, and dropped out after the 9th grade. It was at this moment when he begun to get involved in the streets and live the stories that you hear in his music today.
There is a story behind James’ stage name Boldy James. He got the name from his friend from his block, James Osely III, who people in the neighborhood called Boldy. “He didn’t rap, he just sold cocaine, and I liked the name because his name was James too” says James. When his friend was murdered he decided to carry on the name using it to rap.
In 2009, Boldy James first big break on the national scene came in the form of 2 features on The Cool Kids and Don Cannon mixtape “Merry Christmas”, on the records “BBQ Wings” and “Tires”. That was followed up by his record “Gettin’ Flicked” appearing on The Cool Kids’ 2010 mixtape “Tacklebox”. Also in 2010 he was featured on the record “Fat Raps” remix alongside Big Sean, Asher Roth, Chip Tha Ripper, Dom Kennedy, and Chuck Inglish. Boldy James and Cool Kid member/producer Chuck Inglish are cousins.
On May 24, 2011 Boldy James released his solo debut mixtape “Trapper’s Alley Pro’s and Con’s”. He released several videos from this tape including the fan favorites “JIMBO”, “I Sold Dope All My Life”, and “Concrete Connie”. The project went on to be named by Pitchfork as one “2011’s Most Overlooked Projects”.
The momentum continued in 2012, with the Februray 27th release of his follow up mixtape “Consignment: Favor For A Favor the redi-rock mixtape” via www.thefader.com. The project received great reviews from The Source, Pitchfork, and Stereo Gum. After riding the wave for 2012 the top of 2013 saw Boldy James in full swing. He released a 6 song EP titled “Grand Quarters” on March 5th 2013, which will feature the records “For The Birds” and “One of One”.
On October 15th 2013 Boldy released his debut album, My 1st Chemistry Set (M.1.C.S.), which is produced entirely by Alchemist was released via ConCreatures/Mass Appeal/Decon Records.