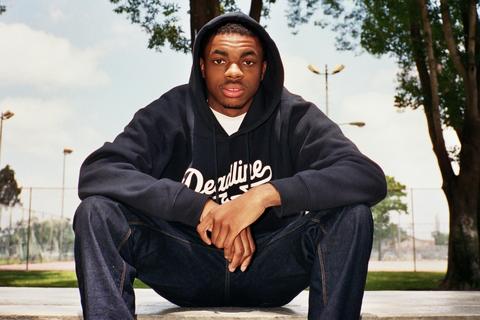 He released the acclaimed Winter In Prague mixtape with rising producer Michael Uzowuru in 2012 and rocked Paid Dues and Fader Fort at SXSW with Earl Sweatshirt in early 2013.

Now Vince Staples returns with the remarkable Stolen Youth mixtape. Produced entirely by Mac Miller (under the alias Larry Fisherman), the collection was born from the near-instant chemistry Vince Staples and Mac Miller had once Earl Sweatshirt introduced the two in early 2013. “We did two songs within an hour,” Staples recalls. “Then it kind of started rolling. We kept making more and more songs.”

The first Stolen Youth selection was “Guns & Roses.” In the hard-hitting song, Staples uses first-hand stories of death, disappointment and pain to craft his memorable lyrics. The lyrical concept came to him as soon as he heard the celestial beat. “It’s creepy, but the beat just kind of sounded like death to me, like the sound of a funeral,” Staples says. “When you go to funerals – and I’ve been to a lot of them – I kind of don’t hear anything. The beat sounded kind of churchy to me, and I don’t go to church unless somebody died. That’s what I associate church with, that somebody must have died.”

Another standout Stolen Youth selection is the ScHoolboy Q collaboration “Afterschool Program.” Staples and Q were both raised in the gang-infested streets of Southern California and decided to write a song about that reality, but with a twist. “The song is saying, ‘This is a lifestyle choice that I made and this is what it’s about,’” Staples says. “It’s an introduction to how things happen out here as far as gang culture. I hadn’t really heard a song that explains that in the way we did. That’s my favorite song on the album.”

Elsewhere, Staples raps, “If I had $100 for every dream that I ever had/I’d barely have enough to right the wrongs I did in the past” on the emotional “Thought About You,” a testament to Staples’ ability to honestly examine his thoughts and emotions and present them powerfully in a song. In fact, Mac Miller came up with the name Stolen Youth because it was a phrase Staples mentioned several times in the material they were recording and because it represents children of the modern era.

Raised in Long Beach, Staples uses a steely flow to discuss life in realistic, often painful terms. He’s a rare modern rapper who mixes top-tier wordplay and riveting storytelling into his material. It’s his way of connecting with the millions of people around the world just like him, young men and women thirsty for relatable perspective and insight in their entertainment.

“Nobody’s really trying to make music to curb their mind, at least not from their standpoint,” Vince says of his contemporaries. “They can’t listen to Lupe Fiasco, Talib Kweli. They don’t know what they’re talking about. But I’m one of them.”

Vince Staples, a leader of the Stolen Youth.