St. Paul and The Broken Bones 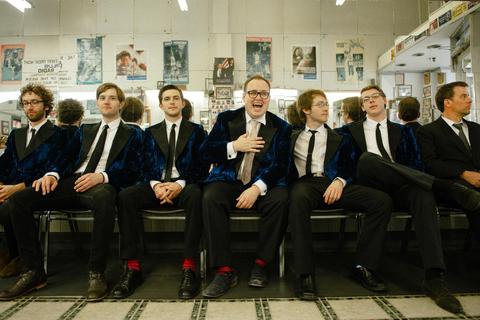 Grit, elemental rhythm, tight-as-a-drumhead playing, and a profound depth of feeling: these are the promises of a great soul band. And St. Paul & The Broken Bones deliver on those promises.

Half The City is the compelling full-length Single Lock/Thirty Tigers debut of the Birmingham, Alabama-based sextet, who have already created a maelstrom of interest with their roof-raising live shows and self-released four-song 2012 EP. Produced by Ben Tanner of Alabama Shakes, and recorded and mixed in the storied R&B mecca of Muscle Shoals, Alabama, the album harkens back to the region’s classic soul roots while extending the form with electrifying potency.

Front man Paul Janeway’s handle “St. Paul” is a wry allusion to the vocalist’s grounding in the church. Like many a legendary soul singer, Janeway, a native of the small town of Chelsea, Alabama, was raised on the gospel side, in a non-denominational, Pentecostal-leaning local church. Virtually no non-religious music could be heard in his devout household. Janeway says, “The only secular music that I heard at all was a ‘70s group called the Stylistics, and Sam Cooke. That was about it. The rest of it was all gospel music. When I was about 10 years old, I was groomed to be a minister. My goal in life until I was about 18 years old was to be a preacher.”

He adds, “My pastor was the reason that I learned to play guitar. They would let me play guitar and sing in church. What was weird was that he would never let me sing lead – I’d sing background vocals. I always thought, ‘Well, maybe I’m just a good background vocalist.’ So I never thought I could really, really sing, at all. I never thought it would be a living, ever.”

Though his time in the church exposed Janeway to key influences in gospel music – the Mighty Clouds of Joy, Alex Bradford, Clay Evans – he began moving away from his youthful path in his late teens. He began attending open mic nights in Birmingham’s clubs and diversified his listening, excited by some decidedly left-of-center talents. “Tom Waits and Nick Cave were the really big attractions,” he says. “They have that passion. They’ve built this aura. They’re showmen to the teeth. And that’s what got me – it’s like going to church, in a weird way. At about the same time, I began listening to the great soul singers like Otis Redding, James Carr, and O.V. Wright. I was trying to find something that made my earbuds tingle.”

Seeking his musical comfort zone, Janeway had an incongruous stint in a band that played Led Zeppelin covers, but, he confesses today, “That’s not what I do.” However, his early work in the rock vein brought him together with bassist Jesse Phillips. The pair became close friends and were soon writing together; “Sugar Dyed,” “Broken Bones and Pocket Change,” and “That Glow,” all heard on Half The City, were among the first fruits of their collaboration.

The other members of the Broken Bones are all drawn from Alabama’s deep talent pool. Guitarist Browan Lollar, from the Muscle Shoals area about 100 miles north of Birmingham, previously played with Jason Isbell’s 400 Unit. “We never thought Browan would ever be interested in this band – he was too big-time for us,” says Janeway. “Jesse had met him while he was on tour with another band out of Birmingham. He asked Browan to come to the studio, and he showed up. I think we caught him at the right time. He wasn’t busy, and he said, ‘Man, I really want to be a part of this.’”

Jasper, Alabama, native Andrew Lee signed on via his acquaintance with Phillips. “We just picked him up on the way to the studio,” Janeway recalls. “Jesse said, ‘I know this guy, why don’t I just call him.’ And 30 minutes later, he’s sitting there playing drums on ‘Sugar Dyed.’ Andrew’s just a hell of a drummer.” Brass players Allen Bransetter and Ben Griner are both graduates of the music program at Birmingham’s Samford University. Janeway says his vision of the band always called for a two-man horn section, a la the celebrated Memphis Horns, and he approached Griner, although the latter’s main instrument was tuba. “I told Ben, ‘Man, I’ve got to have horns. Do you think you can play trombone?’ He said, ‘I’ll give it a shot.’ And he brought Allen with him.”

All six members share writing credit on 10 of the songs on Half The City, with Janeway contributing lyrics. “We firmly believe in a shared, communal writing process,” the singer says. “These guys are extremely talented. The drummer wrote horn parts. Browan threw something in. It’s very collective. We just get in a room. Sometimes we’ll have the scales for a song, or sometimes we’ll have this little riff. That’s how we do it.”

In Tanner -- who logged time at Muscle Shoals’ aptly named FAME Studios, where scores of memorable soul records were cut -- St. Paul and the Broken Bones found a like-minded producer and label boss. Half The City is among the first releases on Single Lock Records, the imprint co-founded by Tanner, John Paul White of the Civil Wars, and Will Trapp

“When we started getting cranked up and nobody really knew who the hell we were, we got Ben to mix our original four-song EP,” says Janeway. “We just hit it off. He said, ‘Hey, guys, I’m in the process of starting this label. Obviously you can say no, but we’d love for you to be a part of it.’ And we said, ‘Hell, yeah.’”

Reaching back nearly 50 years to methods employed the great epoch of deep Southern soul, Tanner and the group eschewed studio trickery for an in-the-moment approach during sessions at the Nutthouse in Muscle Shoals, AL. Fittingly, the album was mixed at FAME. Janeway explains, “We said, ‘We’re doing this as old-school as we can.’ We did it to tape. We did it live. What you hear is taken from about three takes, and we took the best take. I love it. It’s raw. You hear all the scrapes.” Special guests include Al Gamble on piano, organ and wurlitzer, Daniel Stoddard on pedal steel, Jamie Harper on baritone sax and Tanner on piano, organ and background vocals.

“I’m going to be dancing, getting in the aisles, climbing on tables,” he says. “That’s just the way we do it. It really takes me back to church. There’s not a lot of difference. When I get on stage, it’s, ‘All right, it’s time to pour it on.’”