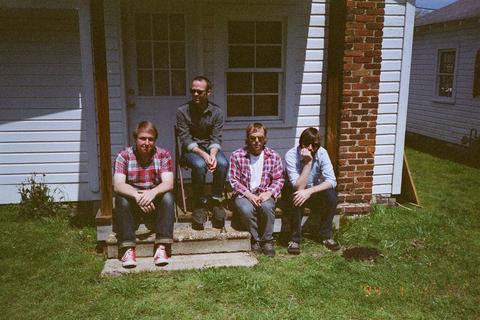 Belle Adair’s first record, The Brave and the Blue, will shipwreck your intellect. One minute the kettle’s ringing, or the light is changing red to green, but you’re gone. You’re swept away to this heart-wandering tiny universe with pedal steel swells and trumpet gulls, love lamented and comprehended. Life, examined and exalted.

The record is the wreck. The island. The raft. You? You’re the drifter. Listen.

“Be Brave” opens the record with two-and-a-half minutes of improvised ethereal ambience, a balm of an introduction to the motifs and instrumentation to come. The track is a reflection of Belle Adair songwriter and front man Matt Green’s admiration of ambient artists like Tim Hecker and Stars of the Lid. The instrumental elements of “Be Brave” undercurrent the first half of the record as the sound evolves, straddling folk and pop, Americana, indie-rock. The band draws from a wide palette of sounds: pedal steel, Rhodes, violin, brass, synthesizers, and guitar, with the acoustic often playing lead. And Green’s soulful vocals, hinting at British whispers and Southern lilts, steady yet brimming with the emotion of each song’s crux. Green, like you, wanders-between The Brave and the Blue-searching for significance in what we can withstand to lose and dare to hope. Much of The Brave and the Blue was imagined in the early mornings of a time of revival for Green, who returned home to Muscle Shoals, Ala., after his Birmingham apartment was destroyed in a fire, the last loss in a series of disappearances: work, love, happiness, reason.

The synced timbres and tones, key and elements, images and ideas of one grand musical atmosphere create the world of Side A. You’ll wander through the cinematic poetry of burning streets beneath a wide black sky past unwelcome guests and lost loves, but don’t distress. The music will carry you through. “Sister” is a dream, embodying the tonal modes of Belle Adair, shifting from sweet acoustics to a crescendo of jangly keys and electric guitar, before fizzing into beautiful distortion. “The Unwelcome Guest” is a lonely slow dance in a Southern bar. Dawn on an autumn beach and the “Clouds Never Break.” You’re alone, for now, drifter. Side B begins with the rosy pop of “Golden Days,” your future unfurling. The organ and horn-drenched “Easy Way Out” is the highway, so rich in sound and ringing with such verisimilitude, your heart will ache and sing, drifter. The candid “Comes a Time” brings you face to face with the possibility of new love. And finally, “The Search” is a grassy hilltop at the destination of one journey, the launch of another. Green sings, “All we seek is what we are given.” Welcome home.

Green’s predilection for sundry styles of songwriting is ever present in the roaming of Side B-a nod to the recording fashions of bands like The Byrds but also a manifestation of place. Green’s access to talented musicians is unlimited in the Shoals. And although the songs begin with Green, they end in the deftly handled instruments of nearly a dozen musicians who gathered at Nutthouse Recording Studio in the Shoals. Of particular note is the backing band’s attention to each song’s needs, always appropriate, never intruding-Daniel Stoddard’s pedal steel, Chris James’ bass, and Patrick McDonald’s drums. For Green, the studio is a fortress, a sanctuary, in which his intentions become tangible; the outside world barricaded from the one he’s creating. Keyboardist and Green’s childhood friend Ben Tanner engineered the record, drawing on the mystical intuition and trust of friendship, completing Green’s arrival home.

Belle Adair casts away the trepidation of traveling roads once rocky. How fitting for a band named after a sunken ship in Steinbeck’s Winter of Our Discontent. Put on The Brave and the Blue. And the kettle, too. Drift away. Forage the once-forgotten memories of your past self, no longer deserted.