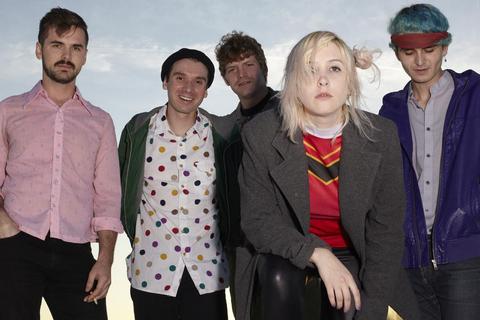 International sensation HOTT MT (Hour Of The Time Majesty Twelve), is an experimental post-pop collective based in Los Angeles, CA. HOTT MT is the result of an ongoing curiosity project between Queen Ashi Dala and Spooky Tavi, which expanded to include Bahd Bad in December of 2011. Thoughts and anxieties about myth, experience, conspiracy theories, and Thailand fuel the groups explorations.

HOTT MT made headlines in 2012 when they drove from LA to Oklahoma to pay homage to Wayne Coyne of The Flaming Lips on his birthday. The trip expanded into a collaboration between Coyne and HOTT MT on the song “Never Hate Again”, and also lead to collaborations with Ke$ha and Erykah Badu. “Never Hate Again” was released by Origami Vinyl as a 7″ single, and by Burger Records on cassette, with an accompanying video also featuring Coyne.

HOTT MT has been perfecting their live performance and preparing for showcases at SXSW. Recent highlights include shows with The Flaming Lips on their Guinness World Record-setting event, Django Django, The Mynabirds, Vinyl Williams, Robert DeLong, and Hands. The band also recently completed work w/ the Flaming Lips on an upcoming Stone Roses cover album, and have been working on new material with artist/producer Pop Levi. HOTT MT’s debut LP “I Made This” will be released on May 21 on Manimal Records (Frenchkiss Label Group), with tour dates to be announced soon.