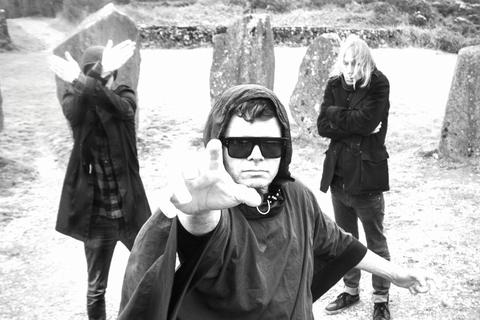 K-X-P are the trio: Timo Kaukolampi (electronics, vocals and the ‘K’), Tuomo Puranen (bass, keyboards and the ‘P’), and alternating drummers (the ‘X’ – for the mystery) Anssi Nykänen and Tomi Leppanen.
Born from the ashes of seminal Finnish groups Op:l Bastards and And The Lefthanded: It’s the antidote to normal bands. Its an anti-band. - Timo Kaukolampi

Oftern they are asked: Are you an electronic, rock, a punk band, prog, or pop band?
We’re an abstract sculpture made of sound and flesh! -Tuomo Puranen
The music proves tricky to categorise with elements of glam rock, Detroit techno, kraut rock, black metal, early electronica and much more, in their minimalist music.
Making specific efforts in specific directions is for robots, automobiles and businessmen- Bands are at their best when they manage to get collectively lost, which can be an almost religious experience at times. - Puranen

The band’s musical background varies wildly, from the "disco-idiotism turned-into spiritual-hide-and-seek" of Op:l Bastards, via the fusion and free jazz explorations of Pekka Pohjola and Jimi Tenor, to the Kraftwerk-ish visions of Aavikko, mixed with electronics, kraut, noise, rock and even rockabilly into a hypnotic and minimalistic motorik groove with references to bands like Spacemen 3, This Heat, 23 Skiddo, Suicide and Neu!

The trio’s sound has been shaped through their hypnotically pounding live shows, which tend to be improvisational and very loud. Given some of the conditions the band has played it, a simple formula is best: high energy level and pure honesty. Plug in and play loud.