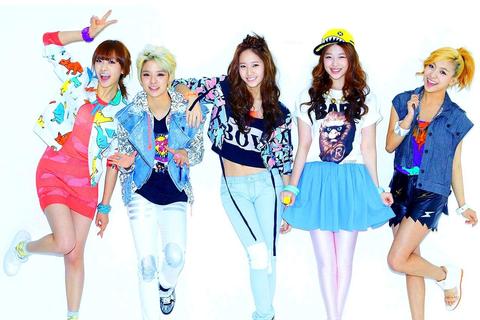 Biography
Providing an electric sounding shock to the system of K-pop for the past couple of years has been music giant SM Entertainment’s f(x), a multi-national, all-female, quaking quintet. The name is a play on the mathematical notation for function, with “f” signifying “flower” and “x” representing the female’s double X chromosome. This group knows how to bring the girl power and dominate the realm of electro-pop, which has turned quite a few heads in their domestic market as well as creating a loyal following internationally.

f(x) is not your typical K-pop idol female group. With a bolder image that makes them a bit less mainstream compared to most female Korean acts, f(x) has remained consistent in their electronic sound, which for a constantly changing market is rare. Since their debut in 2009, they have consecutively garnered some of the most prestigious awards and nominations from musical critics. These successive nominations have put f(x) on the map to become one of the most influential all-female idol groups in years to come and have made critics eager to see what will emerge.

Confident, edgy and bright, f(x) is known for executing more challenging dance moves and unconventional styles in their videos and onstage. Members include Korean members Sulli and Luna, Korean-American member Krystal, Chinese member Victoria and Taiwanese-American member Amber. The group debuted in 2009 with their first single “La Cha Ta” and followed up with their first single album “Chu” gathering three wins and two nominations for Rookie of the Year. In 2010 the unit released their first mini-album “Nu ABO” topping online portal charts Monkey3, Dosirak, and Bugs. The lead single “Nu ABO” made it to the Gaon Chart weekly number-one singles and with the release of their music video the music community recognized f(x)’s trendy fashion for which they won 2 awards in 2010.

The year 2011 brought f(x)’s much anticipated first studio album “Pinocchio” and a repackaged album to the forefront of the pop scene helping the group to make waves among critics and fans. Their hit single “Hot Summer” made heat waves in the summer of 2011. In 2012, f(x) again participated in SMTown’s World Tour in the US and in Taiwan and welcomed critical acclaim and success for their most recent mini album “Electric Shock” as well as debuting in Japan.

The start of 2013 has already been fruitful for the female group seeing them already take home a Golden Disk Award and a Seoul Music Award for their album and song “Electric Shock.” For the up and coming 10th Annual Korean Music Awards f(x) has not one, but two songs nominated for the “Best Dance & Electronic Song” category- quite a rare feat for any group.