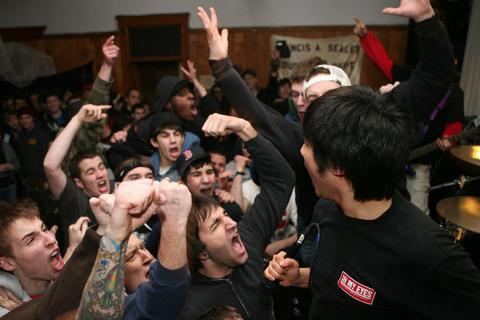 Listen to Every Time We Fall

Remember when hardcore bands sang about important topics and cared about what they said? Well, some still do and, sometimes, you have to look around the world to find them. THE GEEKS is that band. Prior to 2005, THE GEEKS had appeared on compilations within the United States along with the worldwide distribution of their discography CD on Townhall Records which helped introduce the band to the western world. The release of their EP on Think Fast! Records entitled "What's Inside" solidified the band as one of the most sincere hardcore acts in the world today. In 2006, they took America by storm with an incredibly uplifting and inspiring tour which brought them all over the east coast with OUTBREAK and DOWN TO NOTHING and then to the west coast. Hardcore kids flocked to the shows as THE GEEKS established a reputation for their fun live shows which are free of the meathead bullshit that plagues the hardcore scene today. THE GEEKS is to Asia what YOUTH OF TODAY was to American Hardcore. They built a generation of positive hardcore in their country and traveled the world with their message. Every Time We Fall was the band's debut full length on Think Fast! Records. You won't find experimental metal or moshcore cheese. You'll find 12 hardcore anthems of positive hardcore done to perfection straight from South Korea.