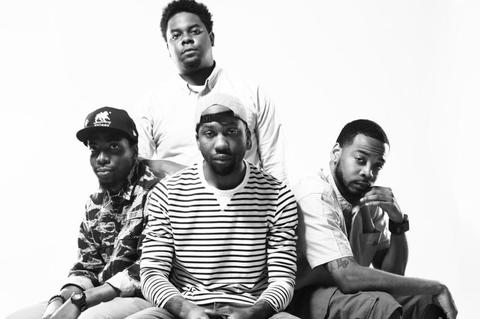 The Niceguys sound harbors Southern roots with musical sensibilities that stretch far beyond the city’s limits. With the September 11, 2012 release of James Kelley, they hope to further push the sonic envelope of today’s Hip-Hop.

“James Kelley is simply, a really fun album,” explains Free. “It’s more detailed musically than our previous efforts, and more well-rounded. We’ve grown a lot musically; our records are a lot stronger now than they were back in 2010.”

The project initially started as an EP, comprised of old and new tracks. However, it took on a life of its own and evolved into one long-playing new project.

“I feel like we have covered a lot of ground and as far as the sound of the album,” adds Christolph. “It’s very timeless in my opinion, and there is musically something for every type of listener.” The project covers all angles of Hip Hop, “from screw-influence to backpacker Hip Hop sh*t,” as DJ Candlestick says. “People are going to end up seeing that we are not classifiable,” continues Yves.

The four met in the halls of the University of Houston, with Free, Candlestick, and Christolph all being Texan natives, and Yves originally hailing from Queens, New York. In 2007, the Niceguys released their debut project in the form of a mixtape, Niceguys Finish Last Vol. 1. Two years later, The Green Room arrived, which was the catalyst for the Niceguys’ inevitable critical acclaim. As the seven-track free EP fluidly mixed soulful rhythms with traditional boom-bappery, it also set the stage for 2010’s The Show.

All of the previous projects show a natural progression for the group, bettering their work with each release. Their creative personalities, however, are more clearly cut and defined on James Kelley.

Each member brings his own flavor to the mix, with Free carrying a positive, optimistic vibe to the circle. “He keeps his thinktank full of Niceguys’ ideas,” says Christolph of Free. Meanwhile Christolph is Mr. Sarcasm, but like Free is an incredibly talented producer. Yves, being the oldest member is often called the dad of the group, “and he can rap his ass off too,” says Christolph.

DJ Candlestick holds it all together. “Candlestick, is without a doubt one of the best DJ’s I’ve seen. He’s very skilled, and technically sound, you just have to hear him spin to really understand it,” says Free of Candlestick’s turntable skills. While they make beautiful music together, it’s clear that they’re all genuinely friends as well.

While often times Hip Hop can feel inaccessible to some, The Niceguys craft a sound that everyone can relate to. “We are just regular dudes, we’re genuine,” says Free. Their “people first” mentality trickles into their music, which represents everyday people, while at the same time reinventing the wheel sonically. Always nice to fans, the group prides themselves on being down to earth.

“I just wish our female fans wouldn’t constantly rip my clothes off my body while I perform. Plus it sucks being hit in the face by panties the whole time you’re on stage,” jokes Christolph.

Described as “delicious,” “fattening,” “swaggy,” and “impregnable” by the group, James Kelley will undoubtedly attract new fans while sating original ones. Tracks like “Magic” hold a perfect balance of Yves’ skillful rhymes hugged by Christolph’s thorough production, while “Married To the Mob” was years in the making, showcasing Candlestick on the beat.

“Ain’t Life Grand” was Yves’ dedication to Christolph, detailing how to overcome life’s obstacles. The tracks run the gamut of topics from poignant to smart, and of course, how to have a good time. As Yves is the wordsmith of the group, his comfort on his bandmates’ production is evident, and the result is pure harmony. Most importantly, though, the music is fun – something Hip Hop has been missing for quite some time.

While most artists take an entire career to find their signature sound, The Niceguys have found theirs in less than five years. Their music is more than just typical Rap, and any fan of any genre can appreciate the labor of love that is James Kelley.

For those who have slept on The Niceguys, it’s time to wake up and check out your next favorite album from your new favorite group. While James Kelley is geared to be a lot of things to a lot of people, Christolph puts it best: “this album will be the soundtrack to all of the wrong choices you make.”