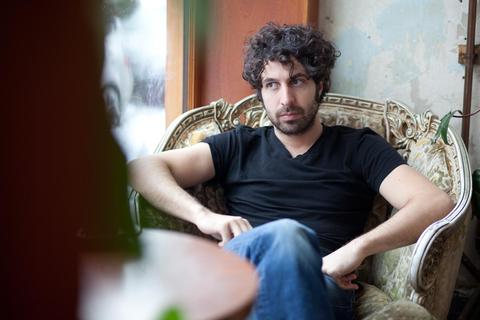 Writing intensely personal music is nothing new for Montreal's Patrick Krief, either as a solo artist or as the longtime guitarist for The Dears, but even Krief himself was taken aback by how strongly the songs he had written for Hundred Thousand Pieces had affected him.

So much so that for nearly six months, the now 32-year-old had to step away from the project, and even began writing for another album altogether. Yet the pull of those 10 songs, which dealt so earnestly with his anxieties about growing older and continuing down the financially precarious road of a professional musician, was simply too powerful to cast aside. All the music had been recorded already - all that was left was for Krief to lay down the most heartfelt vocals of his life.

"I was in the darkest place I had ever been in," Krief recalls. "I had to get out of that dark place in order to finish it."

Dating back to his first release, 2007's Take It Or Leave EP, and continuing with 2009's Calm Awaits as Black Diamond Bay, Krief's songwriting and recording processes have remained remarkably consistent, meaning almost entirely solitary affairs. For the self-produced, self-mixed Hundred Thousand Pieces though, Krief was committed to write an album that bore no relation to his vaunted live performances, where his guitar virtuosity tends to take centre stage. That's not to say the ambitious Hundred Thousand Pieces is his least guitar-driven effort yet - he did after all record around 15 guitar tracks for each song - but it was his first concerted attempt to create music that was strongly evocative, inspired by his work scoring films. Capturing the perfect sounds he envisioned meant having an attention to detail far beyond his previous works. Krief played nearly all the instruments himself (with help from former Black Diamond Bay member Roberto Piccioni), and he also composed the complex, melodically independent string, brass and choir arrangements.

"There's a synth on "The Eyes of Isabelle" that's really quiet in the background, that I specifically wanted to sound like white noise," Krief says, "like the feeling of walking through a snowstorm and not being able to see in front of you. I had a synthesizer and it took me four or five days to get it right." Hundred Thousand Pieces, Krief says, is full of similar touches he obsessed over.

While most of Hundred Thousand Pieces was recorded at his Cote-des-Neiges apartment (his downstairs neighbours should consider themselves fortunate they were away at the time), bits and pieces of it were recorded on his laptop while touring with Black Diamond Bay, the drums were laid down at Mixart studios in N.D.G., and even a few old demo tracks he simply couldn't re-create made the final mix. As for emerging from his dark period, completing Hundred Thousand Pieces has given Krief the resolve to continue on the unpredictable artistic path he's been leading these past eight years, and to not fear telling his stories, his way.

"Songs like "Simple Lives" and "Forever Goodnight" deal with those questions, about packing it all in and making music as a hobby on the side," Krief says. "In the end though, hearing the finished product was the answer - there's no way I could produce something that's so important to me and just let it rot."