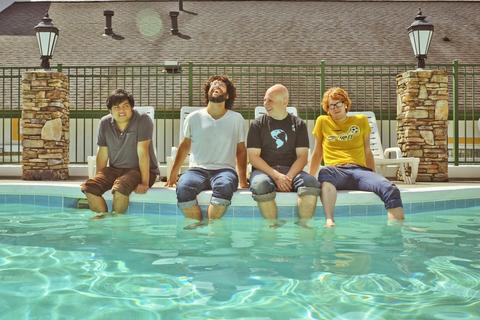 Golden Bloom has always been known for their sharp melodies, vivid guitar work, and intelligent, energetic songwriting; pop music that wasn’t afraid to ask listeners to think, as well as dance. Shawn Fogel launched Golden Bloom as a solo project, playing all of the instruments himself on 2009’s debut full length Fan the Flames, and 2011’s March to the Drums EP.

A cast of multi-instrumentalists joined Golden Bloom on tour, and in the process, they started becoming a band. “At first, I tried to have everyone recreate the sound of the records,” Fogel says. He soon saw that letting everyone bring their own sensibility to the songs made things more interesting. The live arrangements reshaped the songs, moving them away from the album versions. “I realized we’d be a better band if we applied the live band vibe to the writing, arranging, and recording.”

In June of 2012, Golden Bloom live band members Jeff Patlingrao and Josh Cohen travelled to Shawn’s longtime vacation destination of Southwest Harbor, ME where they holed up in a cabin in the woods to work on a new batch of songs. Joined by newly added drummer Justin Hofmann, the quartet retreated to Tarquin Studios in Bridgeport, CT, a facility run by Peter Katis (The National, Interpol, Frightened Rabbit). They produced the sessions themselves with the help of engineer Greg Giorgio. “Many of the songs were arranged collaboratively in the studio,” Fogel says. “The spontaneous energy we generated carried over to the music.”

Golden Bloom’s sparkling pop is still evident, but the EP also adds darker instrumental textures and lyrics that explore thorny emotions with keen insight and understanding. Chiming guitars and subtle percussion accents give “Flying Mountain” the jittery feeling of an anxious mind, but the sunshine breaks through with Fogel’s bright vocal and an uplifting chorus. Stately piano and shimmering guitars fill a vast sonic space to contrast Fogel’s quiet, down to earth vocal on “Deliver it for Me.” “Shadow of a Man” drops a first person fictional narrative into a tight little garage rock tune that’s a little bit twangy and a little bit trashy. “White Whale” shifts between dark but dreamy choruses and pounding power-chord verses. The EP comes to an epic close with “Lone Reporter”, which begins with a single acoustic guitar and slowly builds to a beautiful chaos of blistering guitars and bashing percussion.

Over the lifetime of the band, tastemakers like SPIN, Magnet, Under the Radar, and Daytrotter have praised Golden Bloom’s musical and songwriting prowess. Golden Bloom will be touring to support No Day Like Today for most of 2013.