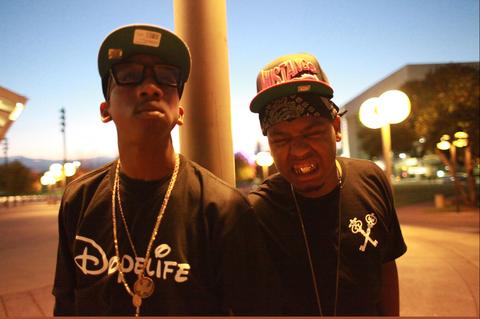 Yung Nation is a 18 year old hip-hop duo from Dallas, Texas formed
by Brandon Reed (B. Reed) and Kendall Johnson (Lil Faime). Yung
Nation’s energy, creative rhyme scheme, unpredictable flow, and
their indefinable vocabulary have gained the duo a loyal and growing
following. Yung Nation has formed what is rarely seen in today’s
hip-hop world, a culture. The “Yung Nation” movement is quickly
spreading across the nation through the internet. Youths across the
globe upload thousands of videos, adding up to over a million views
dancing to Yung Nation’s music. B. Reed and Lil Faime are regarded as
hip-hop’s next big internet sensation to reach a mainstream audience.
B. Reed was born on December 18, 1992 in Dallas, TX. In his youth,
he would spend time in both Louisiana and Texas with his family. Not
only was B. Reed into music but he also played basketball. After pick
up games he would meet up with classmate and childhood friend Lil
Twist (Young Money Artist) on the playgrounds basketball court for an
occasional rap battle. At 11, B. Reed met Lil Faime through basketball,
both being on the same team. After winning a youth championship
game they spit two freestyles, which drove their teammates crazy.

Lil Faime was born on December 31, 1992 in Dallas, TX. Also being
a Dallas and Louisiana native, Lil Faime shared many of the same
characteristics as B. Reed both showing dedication to basketball and
music.

B. Reed and Lil Faime grew in popularity at an early age as members
of a popular Dallas hip-hop click, Thugboss Nation. Thugboss Nation
is a collective group of artists and within their time with Thugboss
Nation, the duo gained many of the loyal followers they have today.
The duo decided to venture off on and formed Yung Nation.