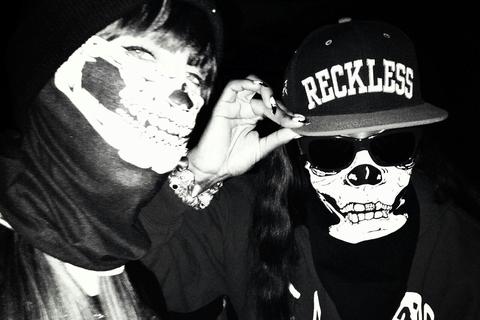 One of the first female MCs to bless the mic with lyrics that embodied both piercing sexuality and brutal storytelling, Memphis' Lola "Gangsta Boo" Mitchell exploded onto the music scene as one of the original members and lone female star of the Academy Award-winning, hardcore-rap group Three 6 Mafia. Her hyperactive flow on the 1997 hit single "Tear Da Club Up" mirrored the skittering drum patterns firing off in the background, showcasing her ability to hold her own amongst a band of bad boys and garnering the MC her own diehard fan base. She helped skyrocket Three 6 Mafia's success into the multi-platinum stratosphere, evident on the 2000 LP, When The Smoke Clears: Sixty 6, Sixty 1. In 1998, Gangsta Boo released her debut solo album Enquiring Minds. It reached #15 on the Billboard Top R&B Albums chart and #46 on the Billboard 200, and spawned the club anthem "Where Dem Dollas At." Enquiring Minds found Gangsta Boo tackling unorthodox and taboo subject matter usually reserved for her male counterparts. From sex to drugs, the Queen of Memphis not only blazed a trail for future Femcees -- she also helped put Memphis on the Hip-Hop map. In 2001, she unveiled her sophomore effort Both Worlds *69, which reached #8 on the R&B/Hip-Hop chart and #29 on the Billboard 200. Her third solo project Enquiring Minds II: Soap Opera was released in 2003 under her own label, Crazy Lady Entertainment, which also marked the beginning of her fruitful MC-Producer relationship with Drum Squad CEO Drumma Boy.

After parting ways with Three 6 Mafia in 2004, the established raptress was tapped by every major artist in Hip-Hop. She collaborated with Lil jon & The Eastside Boyz on the multi-platinum disc Crunk Juice on the underground track "Da Blow." She has also been featured on the albums of Outkast (Stankonia), Ludacris (Disturbing The Peace), and Pastor Troy (Tool Musiq). She has treated listeners to a string of mixtapes over the years to stay on fans' minds. On her latest mixtape, Forever Gangsta, the veteran lyricist evokes every emotion from cries to crunkness. The follow-up installment Forever Gangsta, Part 2 drops in 2013. Her crossover appeal was confirmed when Alabama-bred rapper Yelawolf tapped her for his single "Throw It Up" from his critically hailed album Radioactive. Gangsta Boo does what she does best, rhyming at a rapid-fire pace over a drama-filled beat contrasting perfectly with Yelawolf and guest-feature Eminem's Tazmanian Devil flows.

Don't be surprised to find the Gangsta straddling the fence of Hip-Hop and Hipster music. Her passion for making great art keeps her from being stuck in a box. From wanting to perform with a live band to her continued work with Drumma Boy and Drum Squad, she fully embraces change.

"I'm still the same Gangsta Boo I was when I first came out, but I was before my time back then. I feel like who I am now as an artist and a person has finally caught up with what's going on in music now."