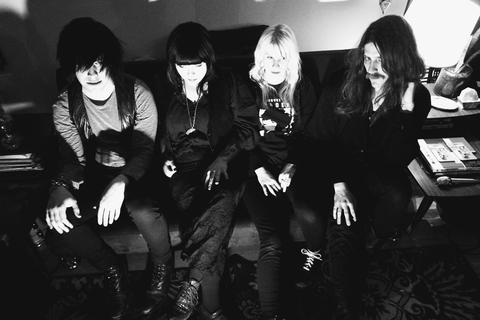 Started in Philadelphia in 2009 as a collective with an obsession for B-movie subculture and avant-garde experimentalism, Far-Out Fangtooth quickly went from a two piece with revolving guests to the four piece it is today. All meeting on the grounds of early Creation Records manic noise, to the grit minimalism of early Cramps and the Velvets, along with a shared obsession of gothic erotica and dark psychedelia.

Beginning with a self-released tape, and moving forward with with a self-titled 7" on local label Ian, all released throughout 2010 quickly made the band a staple for underground shows in Philadelphia. After a tour in early 2011 and a ton of shows, they released their debut LP, "Pure & Disinterested" on Siltbreeze records (who brought us the likes of the Dead C, Harry Pussy, Times New Viking, Naked on the Vague, Circle Pit) After touring sporadically throughout the country (including SXSW for a second time & Hozac Blackout Fest) they released the 3 song EP "The Thorns" on Hozac Records in May 2012.

2013 brings a strong year for the tooth. In the Spring they embarked on a micro-tour in the north east with friends Psychic Blood. The Fall will see the release of the group's sophomore record 'Borrowed Time' to be released Oct 29th on Siltbreeze. The record was recorded at Cobb Studio by Paul Cobb, Produced by Justin Pittney (who recorded the Thorns Ep on a Tascam 338), Mixed by Jeff Ziegler (who resume includes The War on Drugs, Lilys, & Kurt Vile, to name a few) and mastered by Mark Trewella - all in Philadelphia. 'Borrowed Time' is the closest the band has come to hearing them live yet.