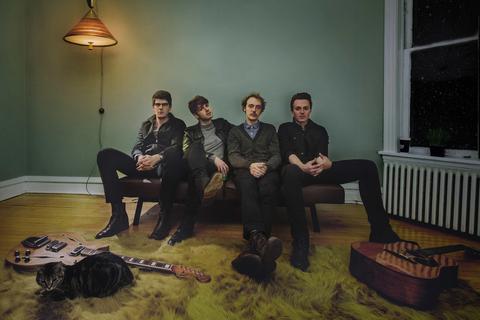 There is a parallel metaphor of evolution one could use to describe Secret Colours since releasing their sophomore effort Peach earlier this summer. Two original members are all that remain of the sometime 6-piece band that recorded Peach: vocalist/guitarist Tommy Evans and drummer Justin Frederick. Within the transformations of relationships, the hardships of being independent, and the inspiration that comes from that independence, Secret Colours is eager to celebrate the much leaner 4-piece collective, rounded out by newcomers Eric Hehr (bass) and Mike Novak (guitar) with the release of two EPs, Positive Distractions Part I (February 4, 2014) and Positive Distractions Part II (April 29, 2014). Recorded at Dandy Sounds by Producer Dan Duszunski, Secret Colours has taken a decidedly different direction with both parts of Positive Distraction– they’re relying much more on the live spirit that swells from the stage, but more so, the songs are unlike anything the band has put to tape over the course of releasing their debut Secret Colours (2010) and this summer’s Peach. (5/28/13)The physical and creative parallels come to fruition as Secret Colours will release a vinyl, cd, and cassette editions of the combined effort called Positive Distractions later this Spring ahead of their first expanded US Tour this summer.