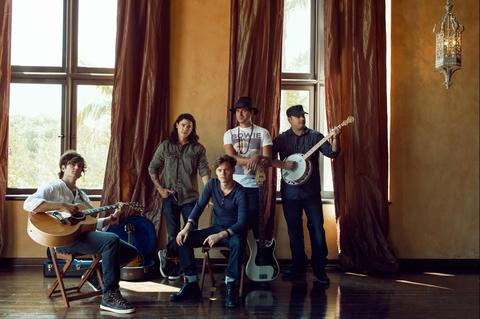 HUDSON is an American rock n roll band that originated in Los Angeles, California in the fall of 2013. The way the band formed is as unique as the music they make. The journey began in 2012 when lead singer David Hudson decided to sing his songs to the world.

Initially coming to Hollywood to be an actor, David had secretly written poetry and partial songs as a way to express his emotions. “It was something that I just used as a form of personal expression…I wasn’t sure of what I wanted to do, but I knew I wanted it to have a positive impact on the world around me.” In early 2012, inspired by a love of music and a passion for performance, he wrote his first full song entitled “To You.” This first song would spawn his musical persona HUDSON, and soon after this he released his first 6 song EP entitled “Dirty Face.” This EP laid the foundation for the future of HUDSON music.

Shortly after the release of “Dirty Face,” HUDSON linked up with Chris Llewellyn and Brian Cohen of LA production duo The Rockstars (Ciara, Flo Rida, Diggy Simmons, etc). Having all been friends prior to this, there was already a common bond that had formed. “We followed the progression of David’s writing and sound. Early on we saw there was potential, but then he came to us with a whole new batch of songs that showed a huge leap in maturity and talent” the duo recall. With a newfound fire starting to burn, the three musicians hit the studio in November of 2012 with the intentions of creating a fresh modern rock ‘n’ roll sound. What came about is the upcoming self titled debut album from HUDSON which blends elements of classic rock, urban, Americana, and pop.

Once the album was complete, the three knew they needed the best live band possible for the project's success. Since they had played most of the instrumentation and provided background vocals on the album, The Rockstars decided they would tour with David until things progressed and called upon their friends Christian Thierbach IV and James Hart to complete the band. Aside from David, the rest of the band had met at different points in time through attending Berklee College of Music. Christian had already played all of the harp on the album and was an accomplished drummer. By playing both instruments at the same time live, he brought an aspect to the band no other act has ever had. James had already played bass with Chris and Brian in their first band together 8 years prior and was always their go to guy for a live bass player. Being the son of famed jazz guitarist Richie Hart, and having been mentored by some of the greatest jazz musicians of all time, James brought a knowledge of music and an understanding and feel for bass playing that is rarely heard in rock music today.

After an amazing first live show at the world famous Viper Room on the Sunset Strip in Hollywood, it was obvious a real chemistry was forming between the band members. A second amazing show at The Glasshouse in Pomona, CA on August 30, 2013 solidified what everyone in the band was feeling…..that the five members playing together live were a much bigger force than just David alone. Each of the members of the band believed in what HUDSON stood for and decided to come together and form an official band on September 1, 2013.

Armed with an arsenal of new songs (their 3 song EP is now available for free download on Soundcloud as well as on iTunes), HUDSON's current focus is hitting the road and spreading their music. "We will not stop until our music is heard by the world," says Chris. "We truly believe that music can help to bring change." Adds David, “Growing up traveling all over, seeing how much people needed help, I realized that we all need help in different ways – and we feel like we can contribute through meaningful music. Our goal is to help create awareness of each other. We’re often too self-conscious and single-minded.” With this forward-thinking attitude and a collection of new music, HUDSON’s heart lies with the people who support their music. "We wouldn't be anything without the support of the people who love our music. These people aren't our fans, they're our friends."