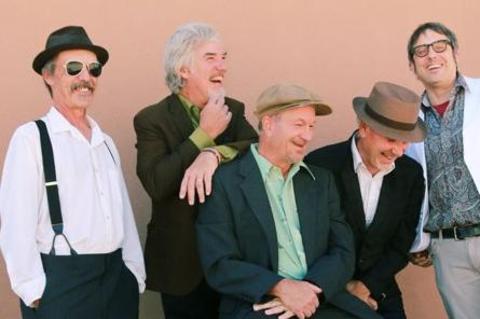 Listen to Drunk Spins the World

The first songs of Shoulders co-founders Michael Slattery and Todd Kassens were conceived over bottles of generic gin in run-down Los Angeles apartments and New York walk-ups, and were taped on a True Tone cassette recorder, with additional percussion provided by the irritated pounding on the floor above or the ceiling below, and with sound effects provided by the blowing horns and screeching brakes on the streets outside their open windows.

By the late 1980s both were back in Austin, Texas, where they had originally met, and where they resumed their exploration of poetry, music, and performance without much knowledge of or concern for how “successful” bands were supposed to sound. After winning free studio time in a battle-of-the-bands contest, they discovered (along with first-time drummer Molly Stevens) that drums were actually supposed to be tuned, like guitars. Unsure of how that applied to the broken appliances and pipes they were beating on, they evolved to more traditional instruments such as parade drum, trombone and tuba, or with beats and noise from Roy Christmann’s synthesizer when nothing else could augment the surreal storytelling.

“The music of Shoulders carries a hint of the eerily surreal – an insane, incandescent, gut-level beauty.”

Shoulders’ first consistent audiences were populated by expressive modern dancers and fearless punk rockers without preconceived pigeonholing notions of genre-constricting categories that the band needed to fit in. With the addition of Alan Williams on drums, Chris Black on bass, John Hagen on cello, and Max Crawford on accordion and trumpet, Shoulders segued from taco shop patios and basement bookstores to premiere Austin venues including the Continental Club, Cactus Cafe, Liberty Lunch, the Hole in the Wall, and La Zona Rosa. The early 1990s also saw the group win four consecutive Austin Chronicle Music Awards for Best Avant-Garde Band, after which the category was abandoned as the music was here to stay.

“A raucous band with poignant, ‘thinkable’ lyrics and something heavy to say.”

Riding on the success of 1989’s self-produced Hungry Man’s Dance, Shoulders signed with the French label Musidisc, releasing the albums Trashman Shoes and The Fun Never Stops to radiant reviews and expanding audiences won through many tours of Europe and the U.S. (shows with The Pogues in the early 1990s remain among the band’s most memorable). Notorious performances known for improvised musical storytelling, youthful acrobatics, heart-pounding rock, and heart-breaking ballads increased the band’s popularity with audiences and promoters everywhere.

Questionable label dealings, drifting musicians, health issues, family comedies, and real personal tragedies unfortunately crippled the band at its apex. Now, Shoulders – made up of Slattery, Kassens, Williams, and veteran bass player Hunter Darby -- has returned with new songs and renewed vigor to challenge the musical landscape once again, armed with 12 new and never before released recordings for the appropriately titled CD "Another Round."