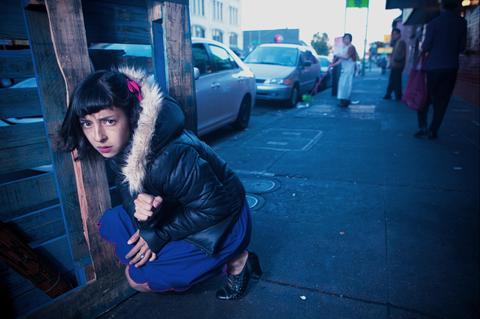 The Bay Area music scene has always been home to unique, envelope-pushing acts like Deerhoof, Joanna Newsom and Primus. But lately, the East Bay town of Oakland, CA has become a breeding ground for a new kind of fever-- groovy, indie-rock with fresh beats and strong voices (Tune-Yards, Trails and Ways). Somewhere n the middle of the hip-hop-meets-hipster madness, Foxtails Brigade stand alone with their junkyard percussion, dreamy chamber-pop arrangements, and anthems for the underdog.

The Hollywood Hills-born daughter of a horror filmmaker and sister of a cult stand-up comedian, front-girl Laura Weinbach grew up in a household that embraced eccentricity. Her next-door neighbors were circus contortionists with emus and fang-toothed monkeys as pets and her childhood activities included snail hunting and spying on celebrity neighbors like Slash, Ice-T and Larry from Perfect Strangers.

Their first album, The Bread And The Bait (2011, Antenna Farm Records) introduced the band with a quirky, stripped-down approach while the follow-up, Time is Passed (2012, DIY) expanded their sound with lush arrangements and classic themes. Foxtails Brigade are probably best known for their music videos (Farmhouse Sessions series and Little Person) , which include numerous animations and collaborations with other artists including entrepreneur/youtube-star Jack Conte (Pomplamoose).

Now with a full band Foxtails Brigade are hard at work in their studio on a third album.