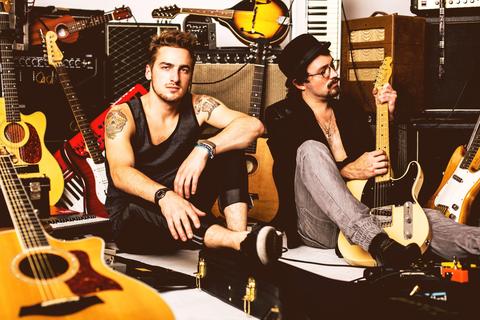 Brand New Single PARALLEL to be release on iTunes 3/25

With over 2 Million Twitter followers, 415,000 Instagram followers, and a momentum that does not look like it will be slowing down, HEFFRON DRIVE is now preparing a full-scale launch into the world of irresistible electro-pop music. Their first US tour was a great successful covered 22 dates in November – December , selling out venues such as the Roxy Theatre (LA), and headlining Webster Hall (NYC), Wilbur Theatre (Boston), TLA (Philly) + more.

What began in 2008 as a passion project in a bedroom studio in Burbank, California has now become a whirlwind endeavor, with energetic and dedicated fans across the globe. Kendall Schmidt is founder of the passionately-adored electro-pop band, Heffron Drive. With money he earned from an acting gig, Kendall purchased some recording gear and embarked on a musical journey with his friend Dustin Belt, knowing only to trust their ears and passion for music. He and Dustin lived on the same little street in California – a little street called Heffron Drive, which would become the name of their band.

The band started uploading songs, to the then-popular Myspace, and soon thereafter began receiving an overwhelming amount of interest. The Internet was buzzing about the new band’s unique music and it wasn’t uncommon to find the play counter hovering around 20,000 plays on any given day. Around mid-2009, however, and soon after the release of Heffron Drive music, Kendall was asked to become the lead singer of the band, Big Time Rush. He accepted, and BTR rapidly became a global phenomenon. Since the recent end of BTR, Kendall has returned to Heffron Drive.