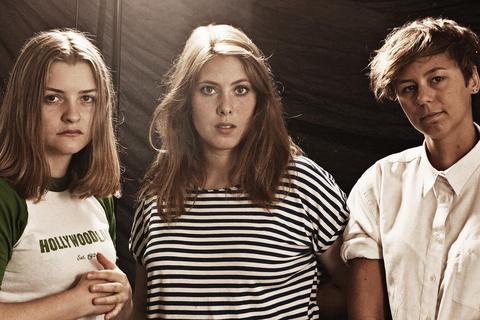 Being but 17-20 years of age, the three girls have impressively fast found their own place in a genre most often dominated by middleaged men.
They play an updated 2013 version of 90′ies stoner rock and grunge, with heavy guitar riffs and screeching vocals, but still draws in references from sludge and heavy metal.
It is filthy rock with dirty guitar riffs, complex and detailrich compositions, earcatching hooks, and screetching callback vocals.

The Danish and international reviewers are already convinced with 5 and 6 star reviews and recommendations from Mojo Magazine’s Kieron Tyler and Intro Magazine. Having supported San Francisco cool Ty Segall and guitar icon Thurston Moore and his band Chelsea Light Moving, as well as having toured the Scandinavian summer festivals extensively, the girls continue to win new fans and impress with their raw, cool calmness and eagerness to prove themselves.

Baby In Vain currently release their songs through their own imprint Crab Salad Recording Company. In the summer/autumn 2013 they’ve released a 7″ series of three, featuring two songs on each 7″