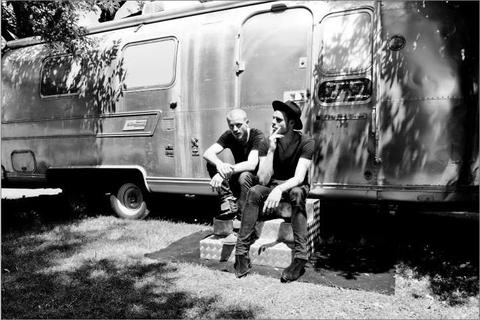 Heymoonshaker are the unlikely pairing of two art forms that are decades apart; Grit-your-teeth, raw, blues guitar and expansive, heart-pounding beatboxing. Urbanizing blues music now for nearly 2 years, Andy Balcon and Dave Crowe are extremely talented at their craft but what impresses most and has made their commitment to Beatbox Blues so successful is the indescribable chemistry these two have on stage. The musical sparring of Crowe’s powerful beats versus Andy’s possessed vocals forge together like two pieces of iron, creating an inspired piece of creativity and originality.

Meeting as street performers in New Zealand in 2009, Andy and Crowe began fusing their interests in the blues and electronic bass music in front of the passing crowds of the south island. After separating to take different travelling routes, the boys re-met back in the Northern hemisphere in Sweden where they began taking their jams to the stage. As their show developed and their touring routes became more extensive, so too did their sound mixing features from heavy rock & roll, roots music and dubstep. But their love and appreciation for the blues is something that stays true throughout their writing and the driving force behind their music. Taking huge inspiration from the likes of Led Zeppelin and Muddy Waters, Heymoonshaker’s big riffs, loud rhythms and howling vocals have impressed in small intimate basement venues to festival main stages.

Last year Heymoonshaker were invited to support Ghostpoet, De La Soul and Baxter Dury at Marseille’s Marsatac Festival, with Rolling Stone Magazine describing their performance as “Dazzling”. This sparked major interest in the band in France and over the past 12 months Heymoonshaker have appeared at some major French venues such as Bataclan in Paris where they supported Walk Off The Earth, and Le Divan Du Monde where they sold out their headline show in May this year.

Not surprisingly, Heymoonshaker’s unique and energetic take on the blues has also been snapped up by festivals around the world. This summer has seen them perform at Printemps de Bourges & Cognac Blues Festival (France), Festival d'Été (Canada), Fusion Festival (Germany), Paléo Festival (Switzerland), WOMAD & Glastonbury (UK), Sziget Festival (Hungary), plus countless others.

Still finding pleasure in hitting the streets with their custom made suitcase, fitted with car speakers and battery, and camera in hand, Heymoonshaker have amassed a huge YouTube following with their official YouTube channel at a staggering 20 million views and rising.

In March 2013 Heymoonshaker released their first EP ‘Shakerism’. This extended 8 track EP contains songs from previous recordings and recent unreleased material, compiled to illustrate the journey of the band’s ever growing sound. This autumn the band re-release the EP as ‘Shakerism (Definitive Edition)’ to include the track Colly Drop from their recent gritty film-noire music video and a solo beatbox piece recorded late last year in a studio in France. The duo also head out on tour in Europe covering France, Switzerland, Germany, Czech Republic and UK.