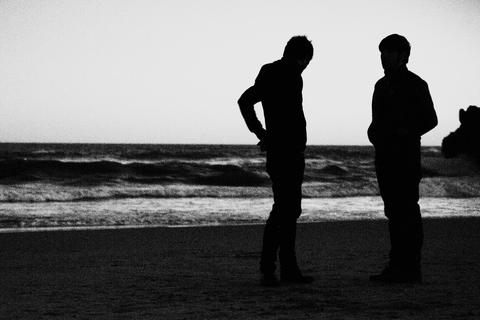 RJ SInclair: Tokyo Sex Destruction have probably had the most metheorical ascension for a BCore band. Because since their debut in 2002 it's been only three years for such an extreme hyper-activity. More than 100 gigs per year, three long-play albums and two EPs are a lot of work, and also the reason of their success. A success that has trespassed spanish frontiers to make them an band with european entity, being nowadays France the best market for their music. Everything started with the aggressive electricity of their debut "Le Red Soul Communitee (10 points program)" in 2002, a discharge of garage-punk full of social awareness, that put them from night to day in the first line of spanish rock 'n roll scene. That was the moral injection needed by this potentially huge band to reach an outstanding position. With the benefit of audience and media they decided that it was the right time to take it seriously and tour and record continuously until nowadays. A vinyl single split with Zeidun through SixWasNine Records, followed by the EP "The big red box for the syndicate of emotions" in 2003 also released in Germany by Trans Solar Records. Then the splendid "Black noise is the new sound!" (BCore, 04), record that made them big in France as never happened before with a BCore band. Then in 2005 with, "5th Avenue South", the most diverse and artistically successful work to date, where garage-punk is everytime more soul-driven and psychodelia flows freely in their most interesting songs.
In 2009 they record the fourth full-length of their career "The Neighborhood", produced by Greg Foreman, member of The Delta 72 and now also playing keyboards with CatPower. An experienced and genius musician who has given an interesting twist to the raw trademark sound of the combo. This great news come after a splendid compaign that TSD have been doing around the globe in the last months: they have toured the USA and Canada, west coast from north to south, from Vancouver to San Francisco, after they were chosen to be at 2008 SXSW festival in Austin, Texas. They did a good job there, so they appeared in 2009 once again. But for TSD the USA is just another country to tour, as recently they did it in Russia, not to mention the hundreds of dates they've been playing around the whole Europe. They're also becoming television favourites: MTV Europe chose them amongst other european bands to be MTV's image and sound for their new campaign; you'll hear "One more sunday" and see them play between a Christina Aguilera video and a Beyonce's one. It's not the first time they appear on a publicity campaign: we had the chance to see them load and unload a Volkswagen van in another TV commercial. Maybe TV series have noticed that, as the acclaimed Friday Night Light on Fox TV, now worldwide, have included "You gotta do it now" on chapter 8. This series is also known for featuring Explosions in the Sky as the main score writers, and you'll also hear songs by Iron & Wine, Iggy Pop and The Black Keys. So a lot of hard work and well-driven talent makes this catalan combo one of the strongest spanish acts, always ready to perform, record, then perform and then record...

Pau Roca: Founding member of LHR (Mushroom Pillow) one of the most important bands of the alternative scene with 8 albums released Spanish (4 of them in the top 20 sales). LHR has played for Spain, Mexico (where they have posted four of his albums and has participated in the "Vive Latino" or "Crown Festival"), Argentina, Chile, USA (part of SXSW) and Germany.

Also toured throughout Europe with his band Litoral (Limbo Starr) with whom he has released an album and an EP that has appeared on every list of the year's best in Spain that matter.

He founded and served on the single disc Phantom # 3 (Limbo Starr), group short but intense career that collected high praise with their only album that filled the top of the "best of the year" in the specialist music press.