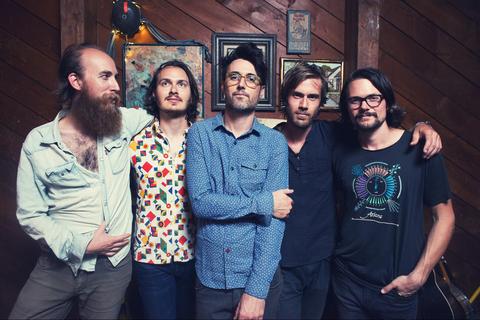 Formed in Orange, California, Kiev was a slow burn, extracting inspiration from improv while carefully adding members over the years. Working in cohesive insularity in their creative space, a 1940s avocado warehouse, Kiev organically metamorphosed into a fully realized multi-
dimensional collaborative by 2009. Between the five members, an intricate, tight-knit web of post punk, psychedelic funk, indie, jazz, jam, and minimalist styles are conjured through meticulous musicianship and mastery of electronics. Adding to the musical imagery on Falling Bough Wisdom Teeth are guest players contributing French horns, bass clarinets, bassoons, trombones, oboe and ARP synthesizers. A strong visual element is an integral part of Kiev’s live shows; the quintet often adds a multi-faceted, tightly choreographed 3D projection element, which earned them the "3DFF Pioneer Award" for their performance at the 2011 Los Angeles 3DFF Theatre Fest.

As the two-part album title indicates, the hour-plus aural journey that is Falling Bough Wisdom Teeth mines more than one source for inspiration: The cover painting, titled “Falling Bough,” by revered contemporary artist Walton Ford and '60s minimalist music pioneer Steve Reich. Despite the band's heady levels of musical, lyrical and visual creativity, Kiev creates inclusionary music that can be appreciated at any - and many – levels. Fans of contemporary artists like Grizzly Bear, My Morning Jacket, and Jaga Jazzist will find a familiar sense of sonic adventurism, technical prowess, and emotional intimacy in Kiev. “It’s all a result of a deep connection the band has that we hope extends to the audience. Any given song contains each guy's fingerprint," Kiev concludes. "The cohesiveness speaks to how much time we spend together and how well we know each other.”