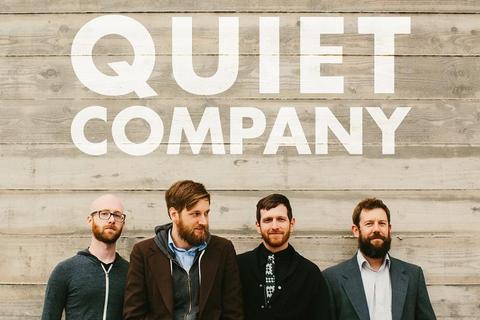 it leaned more towards the rock side of the moniker, if you're a fan of Britpop but feel

like it might be even better when flavored with a twist of Texas swagger, or if you just

want to get sweaty, dance around like a fool and feel some great energy at a live show,

you owe it to yourself to get your body, or at the very least your ears, in front of Quiet

In a changing industry, the one constant has been the live rock show, moving, connecting

crowd-pleasing show on stages across the nation, notably headlining Austin's Blues on

Canadian Music Week, NXNE, Musikfest, and selling out venues in Austin, Chicago and

Quiet Company has self-released 3 full length albums, an EP, a Christmas album and a

DVD in the past five years, and is currently in the process of writing their newest album

with Andy Hull (Manchester Orchestra) producing. This one promises to diverge a

little from their current course, being written in the rehearsal studio by the band versus

being built brick by brick in the studio, and they expect to perform the majority of the

Over the past few years, Quiet Company shattered the record for the most Austin Music

Awards won in a single year, were listed as one of NPR's Bands to Watch in 2012 and

by Time Magazine (http://ti.me/xSajsf), and chosen as one of 8 bands to see at SXSW

in front of a live audience in the original Austin City Limits studio, had music placed

on a variety of TV shows including Hart of Dixie, Keeping Up With The Kardashians,

Teen Mom and many more. They've been chosen as a featured RedBull SoundSelect

artist, placing them in the ranks of many of the biggest bands in the indie rock world, and