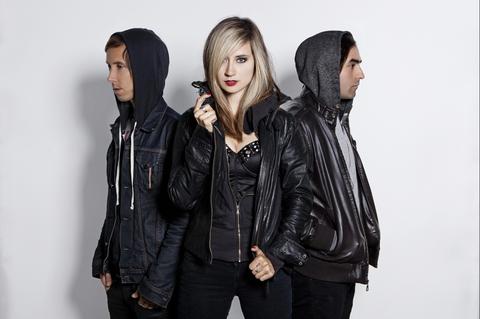 When guitarist Thomas Becker approached singer Alicia Solombrino about playing music together, one small thing stood in their way: 4,500 miles to be specific. Becker, a Harvard-educated lawyer, was living in Bolivia, where he was suing the former president for human rights violations, and Solombrino was in Kansas City, making music with bassist Luis Arana.

Despite the distance, the three began writing songs together, sending rough recordings back and forth. Quickly, they realized that the chaotic blend of punk, dance, new wave, and rock they were creating clicked, so Becker put his law career on hold and joined the band. Within only a few months, the band released a single that received regular rotation on modern rock and college stations in the Midwest, and they were sharing the stage with groups like Smashing Pumpkins and My Chemical Romance. Becker moved back to the U.S., and the band has been barreling forward ever since.

Known for their “charismatic” (HITS Daily Double), "hard rocker" (USA Today), "high energy" (Kansas City Star), even “orgiastic” (Pitch Magazine) live shows, Beautiful Bodies have played with an array of artists ranging from Jane’s Addiction to Paramore to TV on the Radio, making converts of concertgoers everywhere they play. Solombrino’s magnetic – and at times, mischievous – personality has conjured up comparisons to Blondie, the Yeah Yeah Yeahs, and the Runaways. Their music – a combination of habit-forming hooks and blisteringly loud guitars – has been featured on television programs and at professional sports games and New York Fashion Week. The band was recently crowned the winners of Ernie Ball's Battle of the Bands, beating out 32,000 bands. Beautiful Bodies has had a busy year touring and is currently in the studio with John Feldmann (Panic at the Disco, The Used, Neon Trees) finishing a full-length album. Expect fantastically chaotic results.