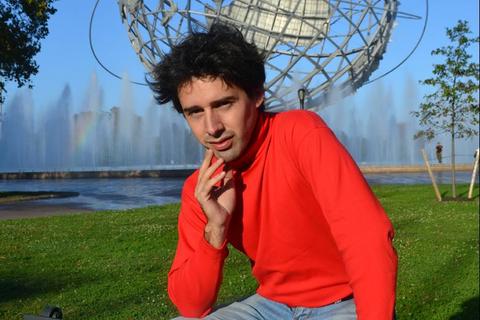 In 2000, Alberto Wauters left Uruguay to live in a basement in Queens. Two years later he called his son, Juan, to join him. Juan Wauters crossed the threshold into manhood when he arrived in New York. Working at a factory, the father and son pooled their money to bring their family to the borough of opportunity. With no friends to speak of, Juan turned to music to take control of the loneliness of his isolation. Juan was inspired by his new neighborhood of Jackson Heights and delighted to find that his library card gave him access to an abundance of new music.

In his debut solo record, N.A.P. North-American Poetry, Wauters dreams big; coming into his own as a singer. Building on his songwriting, popularized by The Beets, Juan presents introspective tracks, like Water and Sanity, and reflections on humans' relationship with technology in songs like Breathing—which features Carmelle Safdie. The record is completed, as always, by the artwork of dear friend and longtime collaborator Matthew Volz, who has honed the trademark visual aesthetic of Juan's music. This album is a selection of recordings made between the fall of 2010 and the summer of 2012 at Marlborough Farms. N.A.P. delivers a fresh sound and lyrical candor from one of Queens' most idiosyncratic adoptive sons.