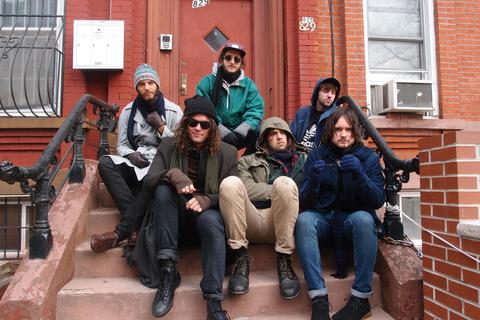 The Growl have spent the first few months of 2013 opening shows for Tame Impala in Australia and across the USA and Canada. They followed that up with two sold out Australian headline tours that exceeded expectations and venue capacities.

After these successes they were promptly confirmed on the line-up for Splendour In The Grass festival, as the only support for a special Kings of Leon show in Sydney, and will start 2014 touring Australia as part of the Laneway Festival line-up.

All this after only just releasing their debut album, 'What Would Christ Do??' in May 2013 to critical acclaim from across the world.

The album was the 7th most added album to US college radio and stayed in the top 200 for six consecutive weeks.

The Growl began three years ago as a bedroom recording project for the multi-talented Cameron Avery. It soon grew to the 5-piece touring juggernaut that it is today.

These days Avery is a busy man. Songwriter, producer and vocalist for The Growl, touring as the bassist for world beating Australian psychedelic act Tame Impala, the drummer for offshoot Pond and recording as one half of Albrook/Avery who recently collaborated with UK act The Horrors.

The Growl is still his passion though; the main outlet for Avery's considerable creativity and talent.

Expect a to hear the sophomore album from The Growl in September 2014.

“Avery was like an evangelical preacher trembling under the weight of God as he was shaking, thrashing, and staggering around the stage, “growling” (there it is) like a man possessed.” – Drum Media

"Led by the enigmatic and brooding Cam Avery, whose stage presence fell somewhere between fellow gravel-voiced singers Nick Cave and Mark Lanegan, the band tore through a series of songs from their debut, the appropriately fanatically-titled What Would Christ Do?, as well as a cover of “John The Revelator” that rivals any interpretation of the blues standard from the last decade or so." - KEXP Blog