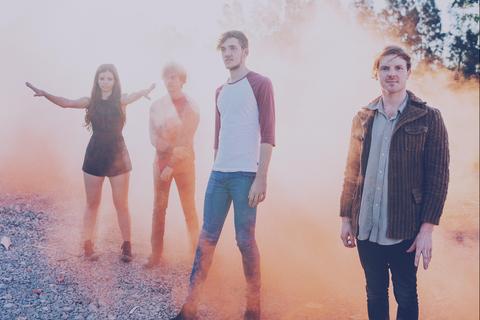 How much can change in two years? For Brisbane indie rock band The Jungle Giants, the answer is: A lot.

Since joining forces in 2011, The Jungle Giants (Sam Hales, Cesira Aitken, Keelan Bijker and Andrew Dooris) have forged a strong name for themselves as an incredible live band with their frenetic shows, gracing the stage of Australia’s biggest festivals and touring extensively upon an ever- increasing fan base and undertaken countless national tours (including a series of plum supports, coveted festival spots and their own sell-out shows).

New EP ‘She’s A Riot’, is an energetic collection of songs that draw’s upon Hales’ own life experiences of love, live, adventure and loss. Lead single, “She’s A Riot”, tackles the universal issues of love and loss with ultra rhythmic percussive lines, harmonies and pop hooks. ‘She’s A Riot’ is about being lost in the moment of all consuming, blinding love.

Reflecting on friendships and relationships, ‘Don’t Know What Else To Do’ tells of the cat and mouse game at the beginning of every relationship (I’m crazy for you girl/ It is why I got to play it cool/ I don’t know what else to do).

In an afternoon in rehearsal room, ‘You’ve Got Something’ was jammed out, hammering home that each of us has something to be proud of it. ‘Way Back When’ is testament to Sam Hales’ vocal range, and ‘Back To The Start’ is an older song that was bought back to life, with the addition of a keyboard part, thanks to the help of Hales’ housemate.

The pop quartet have earned their stripes and are known for their electrifying and rousing live performances. “She’s A Riot” tackles the universal issues of love and loss with ultra rhythmic percussive lines, chordal harmonies and pop sensibilities that will have you swooning over The Jungle Giants.

The Jungle Giants are:

1:00AM The Jungle Giants