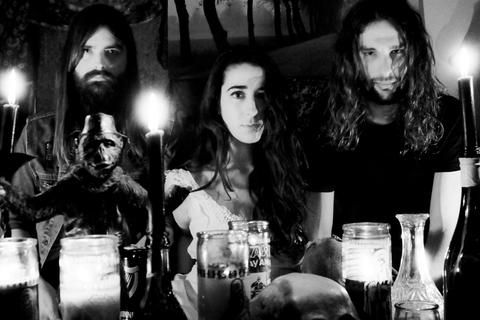 Power trio The Well formed in Austin, Texas in early 2011. Seeking a sound that grew from a nostalgic desire to return to the musical memory of his youth, Ian began writing songs that emulated the classical heaviness of his childhood heroes - riffs the size of mountains, at once distorted and cuttingly sharp - slow, patient, dominating, heavy. The kind of sound that unlocked the doors and let loose the darkness. To help him capture the tonal quality of the sound inside his head, he enlisted the talents of bassist Lisa Alley and drummer Jason Sullivan.

What of The Well's sound? It's drawn obvious comparisons in critical reviews to Black Sabbath, Sleep, Electric Wizard, and St. Vitus, yet manages to hold its own unique tambre - one that, stimulates both the ear and the mind of the listener. This could be due in part to the dual vocals, delivered in unison by Ian and Lisa, evoking the haunting quality of a chanted, ancient language. It might be due to the lyrics, refined and detailed in a way that defines the craft of songwriting. Maybe it's the thudding, heavy bass, the war mongering drums, or the richly blistering riffs that form the musical crux for The Well to derive their power from.

Whatever defines their sound, it's certainly caught the attention of individuals at the top of the music industry. Working with Tia Carrera's Jason Morales, The Well recorded their debut 7" at the Barbeque Shack in the spring of 2012. By the fall, they were back in the studio again, this time at Ohm Recording Facility with Producer Mark Deutrom (of The Melvins and Sun O)))) and Engineer Chico Jone, working on a full length LP due out this year. They recorded with Converse Rubber Tracks during SXSW 2013, and put the resulting track, Eternal Well, together with a handful from the Ohm sessions together for their West Coast Summer Tour EP, entitled, "First Trip".

Since returning from said first trip, 2013 was a breakout year for The Well. Teaming up on a multitude of Transmission Events shows, The Well shared a bill with such acts as NAAM, Orange Goblin, Holy Grail, Lazerwolf, and Dead Meadow, and provided official after shows for genre mainstays High On Fire and haunting songstress Chelsea Wolfe. Sonic Vault Austin named The Well their 2013 Metal Band of the Year, and the Austin Chronicle invited the band to be their showcased artist in their PaperCuts Series for February of 2014. With this, a 2014 SXSW Nuclear Blast showcase alongside the likes of Kadavar, a full US Summer tour in the works to support the release of their Debut Full-Length LP, 2014 is stacked to be another promising year for The Well.