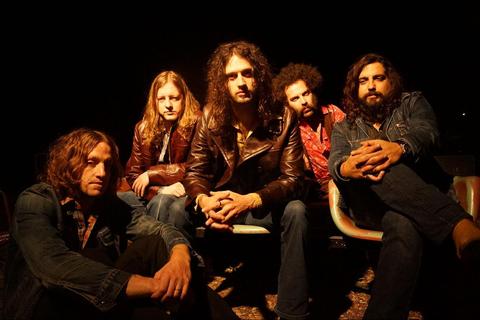 Attributes in music are known to be cyclical. Every few years, a band comes along who borrows just enough from the revered past to bring a new infusion of vitality to the musical present. SCORPION CHILD's sound invokes a time when guitar-driven rock ruled radio's airwaves, when being hypnotized by a frontman and his bandmates in a concert arena was one of life's ultimate main events. A five-piece from Austin, Texas, SCORPION CHILD have spent the last few years perfecting both their songwriting and stage show. Guitarists Chris Cowart and Tom "The Mole" Frank deliver their finessed twin guitar attack with experience older than their years; bassist Shaun Avants and drummer Shawn Alvear are steadfast sentinels of their driving rhythm section; and lead singer Aryn Jonathan Black fronts the psychedelic rock cavalry with a passion & voice reminiscent of the early eras of Robert Plant and Ronnie James Dio.

“I’ve always wanted to hear new musical ingredients within a classic heavy sound," states vocalist AJB. "It’s great to witness captivating performances where both the live show and the band’s recorded material can complement one another. The heavy-prog sounds of Uriah Heep, Hairy Chapter, and the epic delivery of early Rainbow showcases these crossovers brilliantly and gave us all honest - yet relentless - sonics to aspire to. That's why it’s important for us as a band to maintain spontaneity while putting a special emphasis into integral hooks.”

This June, Nuclear Blast Entertainment will release SCORPION CHILD's self-titled, full-length debut. Produced and arranged by Chris “Frenchie” Smith (The Answer, Jet, And You Will Know Us By The Trail Of Dead, The Toadies, Dax Riggs), the album uses analog recording technology to organically capture a hybrid of nine, hook-filled chapters of heavy psych rock. The goal? To breathe new life into a neglected yet still important musical heritage.

Dangerous guitar riffs, soul-ridden bass lines, and thunderous drums with powerful rock vocals as lead conductor convey the on-stage swagger of SCORPION CHILD and will prepare you for the experience awaiting you see the band perform live.